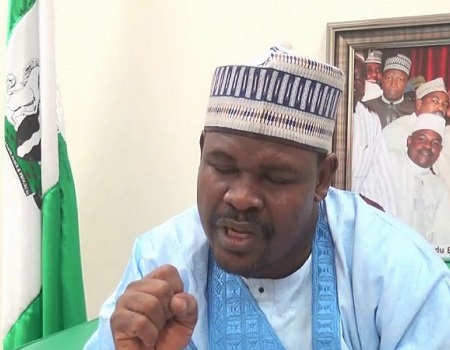 A member of the House of Representatives on Thursday raised alarm over the N1.3 trillion budget of the Central Bank of Nigeria (CBN), for the 2020 fiscal year, describing it as outrageous and alarming which should be reviewed in the nation’s interest

This came just as the lawmaker called for an immediate reopening of the nation’s shut land borders with the neighbouring countries, even if it would be for a short time to allow for the clearance of the goods affected by the sudden closure.

Briefing newsmen in Abuja shortly after the plenary, Hon Kazaure appealed to President Muhammed Buhari to consider the plights of the millions of Nigerians who voted him to the office and others who may have invested heavily on importation of goods into the country but were caught up with the border closure to reopen the land borders.

Hon Kazaure equally slammed the CBN for disregarding a resolution of the House over of the implementation of the money deposit and withdrawal charges by banks, after the House advised that the policy be suspended.

He disclosed that he would personally sponsor a motion on the floor of the House next week, to canvass for a drastic trim down of the budget.

According to him, “In 2019, the budget of the CBN was N420 billion, but the same CBN brought a budget of N1.3 trillion for 2020. What are they producing? Which revenue are they generating?”.

He said he would persuade the House to ask his colleagues in the appropriation committee to bring down the budget of the CBN to N300 million, while the balance of one trillion naira is distributed to health, education and the federal government’s N-Power social intervention programme.

According to him, ” I am pleading with Mr President (Muhammadu Buhari) to ensure that resources are put into places where they will benefit our people”, he said, adding the bank charges are discouraging local people from lodging money even at their risk losing same to robbery.

“The appeal became necessary in view of the challenges being faced by businessmen who were caught unaware of the sudden closure, while their goods were already on the way

“Some of the consignments I have seen deal with time, because they are perishable, and the goods I saw are not contrabands. Some of the businessmen collect loans from the bank.

Serial entrepreneur and CEO of ‘Wear it All Luxury’, Sodiq Rufai, honoured