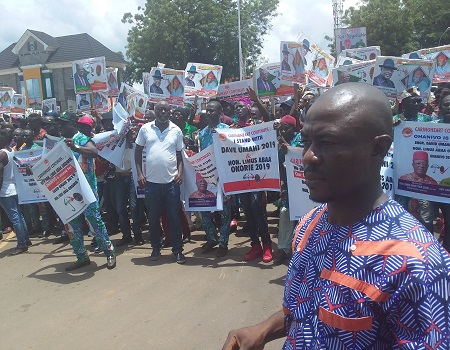 According to the group leader, who doubled also as the leader of caring Heart foundation, comrade Nnamdi Onu, said they embarked on the massive solidarity match round the major roads within the capital city, to compliment the efforts of the governor whom according to their assessments, have surpassed his 2015 campaign promises to the state .

The group commended Governor Umahi for tackling all the infrastructural challenges thereby changing the status of its citizens within and outside the state.

“We the Ohanivo, most populated constituency and most represented in Ebonyi state stand with our Governor David Umahi and Hon. Linus Abba Okorie.

“Your Excellency, we can unequivocally affirm that you have transformed Abakaliki capital city which now competes favourably with best cities in the country.

“You have painstakingly tackled the myriad of infrastructural challenges through massive construction projects in all the nooks and crannies of the state.

“Your financial prudence and transparency have attracted the attention of anti-graft agencies that now confer special awards on you that is why we the Ohanivo sons and daughters are here to show our solidarity to you our son,” he said.

Meanwhile, the group also compliment the efforts of Hon. Linus Okorie their representative at the National Assembly for the meaningful impact he has brought to their area which according to them, has given hope to the hopeless through his free medical outreach in the ten communities made up of Ohanivo.

“Hon. Linus Okorie has touched many lives from our constituency through his free medical outreach programme and other programmes he has organized for the constituency so we are also calling for his re-election come 2019.”

My heart was with Buhari in 2015 polls ― Akpabio