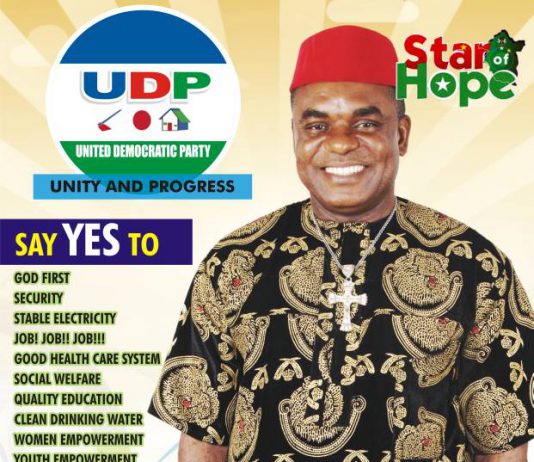 GOVERNORSHIP candidate of the United Democratic Party (UDP), Enugu State, Pastor Donatus Obi Ozoemena, has said he would create employment to over 10,000 youths in the first quarter of his administration if elected in 2019.

Ozoemene also promised to revamp healthcare system as well as provide social welfare for the elderly and less privileged in the state.

Pastor Ozoemena who made the vow while speaking at the official flag-off of his campaign/civic reception in his honour at Awgu in Awgu Local Government Area of the State, said he left his comfortable life back in the United States of America, USA to come over to deliver Enugu State, stressing that it is time for great things to happen in the state.

“Now is the time to provide clean drinkable water to prevent water-borne disease. Now is the time to bring stable electricity so as to make businesses thrive. Enough of the unemployment and jobless youths roaming the streets,” he said.

According to Pastor Ozoemena, he had been directed by God to go home and help rebuild his birthplace, adding, that, “the Lord said to me, do not be afraid, for I am with you. Do not be dismayed, for I am your God. I will strengthen you. Yes, I will help you. Yes, I will uphold you with the right hand of my righteousness.

“We have solutions to what is wrong in Nigeria. I have spent a good part of my life and worked in the United States of America where we usually ‘honker down’ on problems, analyze the problem to understand it clearly, find solutions to it and put into actions until it is resolved. Failures usually are not options. That’s what we do and that’s why we are different,” he added.

On rotation of governorship among the three senatorial zones in the state, the UDP flag-bearer said, “it is a serious joke to sacrifice character, capability and competence which are the vital ingredients of great leadership on the altar of zoning.”

In his speech, the State Chairman of the UDP, Prince Jideofor Ngene, said his party would, among others, provide empowerment, build strong and durable infrastructures and create an enabling environment for the people of the state to live and do businesses.

“We shall carry everyone along and leave no one behind as we go to work to bring restoration, dignity, progress, prosperity and greatness to our land. I encourage you all to place hands on this deck as we place our greatness in the map of the world,” he added.