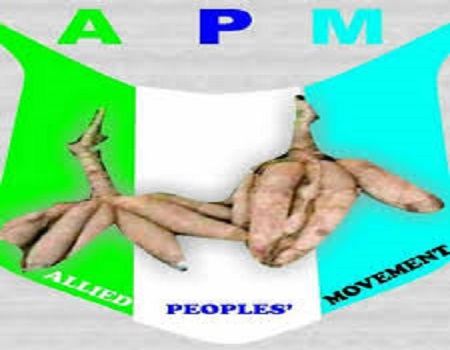 Allied Peoples Movement (APM) House of Representatives candidate for Remo Federal Constituency, Honourable Yinka Mafe, has declared that the three-week-old party is set for victory in next year’s poll in Ogun State.

Mafe described APM as child of circumstance put together to fight “sheer illegality and injustice” meted to them while in the All Progressives Congress (APC) and to as well contain a group of people he termed “Lagos expansionists” who are scheming very hard to halt the rapid development of Ogun State under Governor Ibikunle Amosun.

The lawmaker, who currently represents Sagamu Constituency II at Ogun State House of Assembly, stated this yesterday while speaking during the inauguration of the campaign committee of the party for Remo Federal Constituency as well as the presentation of flags to the candidates of the party at a rally held at Gateway International Stadium, Sagamu.

Mafe, who also doubles as the majority leader in Ogun State House of Assembly, said: “APM is a child of circumstance adopted to fight injustice, slavery and retain our freedom from Lagos expansionists who want hinder the continued rapid development of Ogun State as we have seen under Governor Ibikunle Amosun.”

He said, “though victory is of God, I am confident that our party will record a landslide victory in Ogun State next year because this struggle is about continued progress and prosperity of our people.

“It is about the rejection of a wicked arrangement whereby the resources that are meant to take care of our people will now end in the pocket one or two people. So, our victory is certain.”

The lawmaker explained that APM government hoped to continue with the mission to rebuild the state as championed by Govenor Amosun in the last seven and half years but with more focus on rural development and agricultural integration.

Presenting the party’s flags to all its candidates in Remoland, the state chairman of the party, Honourable Patrick Oyatayo, urged the party’s standard-bearers to shun violence and conduct themselves peacefully during the campaign.

Oyatayo described APM as a party that would continue with the strides recorded by Governor Amosun beyond May 2019, calling for more support and cooperation towards achieving victory at the poll next year.