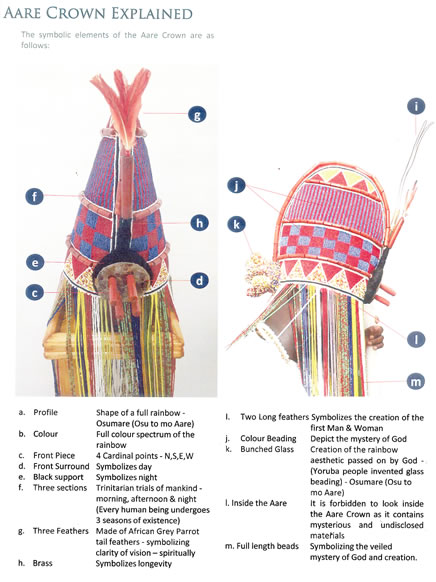 To many uninitiated, and those without knowledge of history, Are Crown, which is tied to the celebration of Olojo festival, is a mere contraption of beads in colourful configurations without any significant relationship to the existential providence of the Earth and the survival of its people within the egg shaped formation.

This bogus assumption was punctured with esoteric facts, verifiable historical acts, scientific occurrence and progenitor heritage by the Ooni of Ife, Oba Adeyeye Enitan Babatunde Ogunwusi, while unveiling the 2017 Olojo Festival logo in his palace on Thursday.

The Ooni confirmed that there could not be the months or the existence on the Earth without the Are, that is the divinely ornamentally embellished sacred and symbolic crown which signifies the existence of the world, its people and the conglomeration of all days which make up the Osu (months) within the precinct of the Are.

Oba Ogunwusi pointed out that the Are is not handed over to an Ooni by human – never, but by others means which no Ooni can explain but with all elements making their presence visible and felt within minutes of its descending to the Earth.

He revealed that the Are is to the world as the umbilical cord is to a child. ‘The Are is the controller of the Rainbow as the Rainbow cuts all its characteristics and features from it. You can know the import of the Are if you know the relevance of the rainbow in the Bible”

Kabiyesi made specific analogy out of the features of the Are to establish that without Are the world will be in void.

Thus, the celebration of Olojo festival is not a local cheese or a coffee cup meant for the few but a globally relevant festival which is compulsory for the survival of the Earth and the people within its oval shape figure.

And it is the reasons why all men from all walks of life will be at Enuwa, Ile – Ife on September 30, 2017 when the Ooni Ogunwusi will celebrate the event which led to the formation of the second, the minutes, the hours, the day, the week and the months

Olojo is a festival of life; the creation and formation of existence.

Meanwhile, the Ooni of Ife, Oba Adeyeye Enitan Ogunwusi Ojaja II has launched Goldberg’s empowerment scheme, Isedowo and commended Nigerian Breweries Plc for the initiative at the flag-off of the campaign on Thursday, 31 August 2017.

The event, which held at the palace of the revered monarch in Ile Ife, Osun State, had in attendance prominent Obas and chiefs from the Southwest region of the country.

The Imperial Majesty expressed his appreciation for the youth emancipation initiative and commended Nigerian Breweries at the occasion for taking a bold step at improving the lot of small scale entrepreneurs in the Southwest region.

“On behalf of my brothers from the seven Yoruba speaking states, I thank Goldberg lager beer and Nigerian Breweries for this community partnership with the Yoruba people. By leading the way to support the businesses and entrepreneurial potential of artisans in the Southwest, you have challenged other corporate bodies to give back to the society where they operate,” the monarch declared.

The King further called on all Yoruba youths who are skilled in trade to grab the opportunity to showcase their business potential and be rewarded.

The Marketing Director, Nigerian Breweries Plc, Franco Maria Maggi declared during the occasion that Goldberg was honoured to identify with the King through Isedowo. He added that the empowerment initiative presented a mutually benefitting union between His Majesty, who is the custodian of the Yoruba culture, and Goldberg, a brand that not only respects the values and traditions of the Yoruba people but also seeks to empower the young men and women in the region.

“We believe that as the custodian of the Yoruba culture, your blessings will rub off positively on Isedowo. It will set it on a path of achieving the objectives of positively transforming the lives of its beneficiaries with spill over effects on the larger economy by way of increased job creation and income,” Maggi said.

The occasion also witnessed the rewarding of the first set of entrepreneurs who were selected as the best in Osun State. 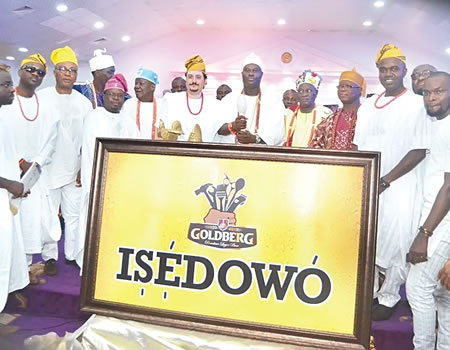 Adeola Olajide, an auto mechanic from Abeokuta, Ogun State who resides and works in Ile Ife, Osun State, emerged as one of the beneficiaries and was rewarded during the occasion. He expressed his gratitude to Goldberg for the support, adding that the initiative was a welcome development.

“When I heard the news on radio, I realised this is one of a kind in this part of the country, and I decided to grab the opportunity. I am very happy to have emerged a winner today and with my reward, I intend to buy equipment that would bring about ease in my business,” he said.

Goldberg is known across the Southwest region as a leading supporter of culture and tradition and through Isedowo, it has become the brand that shares in the economic aspirations of the people.