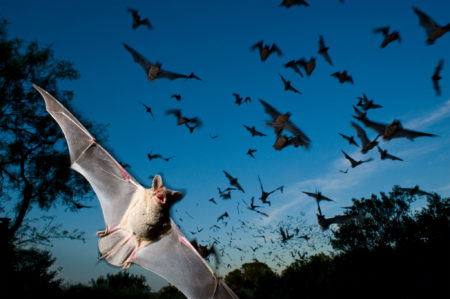 RESIDENTS in a small town in the north-eastern Australian state of Queensland said they have been “held hostage,” by 200,000 bats.

No fewer than 200,000 flying foxes, the world’s largest bats, have overrun the Charters Towers’s residents since Friday, the mayor of the town told dpa on Monday.

A resident Elizabeth Schmidt said: “It’s an absolute disaster – what we have is a nightmare.

“We have had flying fox problems but never in such huge numbers.”

The local council has already shut down two public parks, a swimming pool run by the council and other public spaces.

Frustrated residents took to the streets over the weekend in a march against the town’s council, saying the problem had reached “a tipping point” and calling for action over the “plague of terror.”

The former gold mining town has housed a massive bat colony because of the region’s abundance of native flowering eucalypts, but residents said they are now being held, hostage.

Snow Hearne, a local resident for the past seven years, said bats have been a nuisance, but things have escalated “to an extent where nobody can go outside their houses.”

“The stench is horrific and the screeching sound, especially in the evening, because it is mating season, is unbearable,” she told dpa.

“We can’t even go out to our backyards. We are held, hostage.”!

“Everything in the park is covered in flying fox faeces and you worry about getting urinated on,” Kim Gott, another resident, said.

Flying foxes are crucial for the keeping native forests healthy and play an important role in pollinating plants and flowers as well as dispersing seeds over distances.

The animals also can host the Hendra and Lyssa viruses, which can be fatal to humans.

Mayor Schmidt said many people have complained about health-related issues, but not “any serious health risk as of yet.”

“No one has said why there is a sudden influx and we also do not have the resources or technical know-how to deal with this huge problem.”

“We need a long-term solution,” Schmidt added. “We will send a delegation to Brisbane to find a solution as soon as possible.”

Schmidt said the council is not allowed to disturb the bats’ natural habitat as one of the two parks in the town is a registered roost for the flying foxes and so it is a protected area protected by the Department of Environment and Heritage.

A spokeswoman for the department said Charters Towers is not the only place to have experienced high numbers of little red flying foxes in Queensland in the last few weeks.

“Little reds move around in search of their favourite food, the flowers and nectar of native trees,” she told dpa.

The current flowering of paperbark trees and bloodwoods near Charters Towers may have attracted the animals, which can travel hundreds of kilometres when attracted by flowering events.

“At the moment it is also mating season for little reds, a time in which males show increased territorial behaviour, and roosts may spread out into neighbouring areas,” the spokesperson said.

“Unfortunately Charters Towers appears to be experiencing a combination of these events.”

She said the flying foxes, which are vagrants by nature, will move on after the flowering event.

“Killing flying foxes is not a viable option. Besides the dangers of firearms in town, the animals are likely to be replaced by other flying foxes arriving from elsewhere,” she warned.