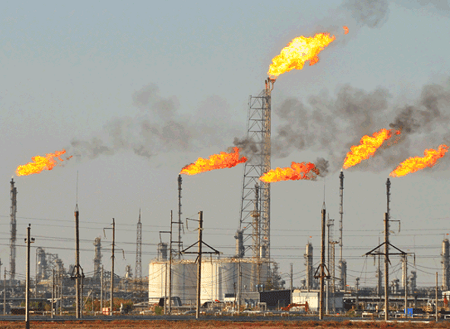 In its efforts to reduce the 320 billion cubic feet of gas (bcf) of gas flared in 2019, the Department of Petroleum Resources (DPR), has announced the shortlisting of 200 companies to develop 45 gas flare sites across the country under the Nigeria Gas Flare Commercialisation Programme (NGFCP).

Speaking at the NGFCP bidders’ conference in Lagos on Monday, DPR Director and Chief Executive Officer, Engr. Sarki Auwalu disclosed that NGFCP was launched in 2016 and it is designed as the strategy to implement the policy objectives of the federal government for the elimination of gas flares with potential enormous multiplier effects and development outcomes for Nigeria.

He added that the objective of NGFCP is to eliminate gas flaring through technically and commercially sustainable gas utilisation projects developed by competent third-party investors who have been invited to participate in a competitive and transparent bid process.

He disclosed that the 200 bidders were drawn from a pool of 800 who had expressed interest to manage about 178 gas flare sites.

He assured that there are other flare sites which are coming on board, saying this was just the first stage of the bidding round to be followed by others in due course.

He said Nigeria is the first country to have taken the bull by the horn through its NGFCP initiative aimed at putting an end to gas flaring, adding that the number of bidders attests to the fact that investors across the globe are interested in Nigeria.

Engr. Auwalu maintained that Nigeria, having ratified the Paris Climate Change Agreement, and also a signatory to the Global Gas Flaring Partnership (GGFR) principles for global flare-out by 2030, has committed to a national flare-out target by the year 2020.

He lamented that it remained worrisome that of the 800 scuf of gas processed daily, only 17 per cent goes into the domestic market while 11 per cent was still being flared.

“The 11 per cent of gas that is still being flared is what we are now set to take out, and it’s part of Nigeria’s commitment to the Paris climate change agreement which we signed in 2015. This will launch Nigeria into the global perspective that we are committed to the promise that Mr President took for the entire people of Nigeria, he said.

He noted that flared gas could be harnessed to stimulate economic growth, drive investments and provide jobs in oil-producing communities and indeed for Nigerians through the utilisation of widely available innovative technologies for gas-based industry.

According to him, the commercialisation of flared gas for supply into the domestic market is a high priority strategy for the government in achieving the national mandate for flare-out by 2020, adding that government will take measures to ensure that flare capture and utilisation projects are developed, and will work collaboratively with industry, development partners, providers of flare-capture technologies and third-party investors.

On pricing, Engr. Auwalu said the recently launched Gas Transport Network Code in Abuja last week, would go a long way in addressing issues around gas tariffs because prior to the launch of the code there was no open access or unified gas sales agreement, adding that the code has helped to resolve that through equitable pricing across the gas value chain.

He said the code will further provide a guide to the gas producers, purchasers and distributors, ultimately giving benefits to the gas users that are Nigerians.

The Programme Manager of NGFCP, Mr Justice Derefaka, stated earlier that it has the potential of generating approximately $3.5 billion of investment into Nigeria, as well as the potential to impact the country’s Gross Domestic Product (GDP) by an estimated $ 1billion per annum.

“It could potential unlock 2 to 3 LNG trains, around 3000MW electricity generation as well as generate circa 600,000MT of LPG per year giving 6 million households access to clean energy through LPG.

“The programme could also bring an inflow of new infrastructure players to enable gas uptake and usage in previously unreachable regions and business development from gas companies to unlock new domestic markets for gas,” Derefaka, added.