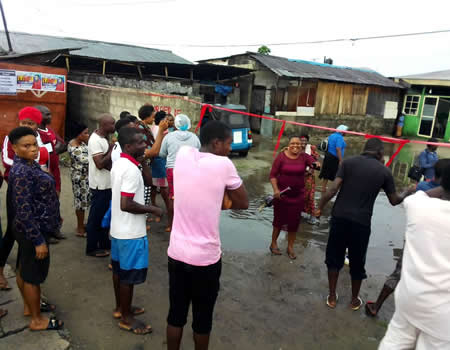 The Appeal Court sitting in Benin-City, Edo State, has set aside a judgement delivered by Hon Justice .A.P.E. Awala of the Delta State High Court, ordering the New Jerusalem Church of God, Warri, to take possession of the house and land at No. 49, Iyara Street in Warri South Local Government Area of Delta State.

The judgment, which was unanimously delivered by Justices, Helen Moronkeji Ogunwunmi, Philomena Mbua Ekpe and Samuel Chukwudumebi on March 8, 2019, following a “Notice of Appeal” filed by the church, was effected last Friday.

The execution of the judgment by operatives of the Delta State Police Command with a “Seal” on the disputed land sparked wild jubilation from members of the church who heaved a sigh of relief after over 20 years of litigation to reclaim their land.

Delivering the judgment, Justice Ogunwunmiji, averred that “I am persuaded that there is merit in this appeal and that it should be allowed. The judgment of Hon. Justice A.P.E. Awala delivered on 19/5/2006 in Suit No.W/177/03 is hereby set aside.

“The claim at trial is statute barred and it is hereby struck out. N100,000.00 for the Appellants against the Respondent.”

It will be recalled that Hon. Justice.A.P.E. Awala of the High Court, Warri, had on 19/5/06 delivered the said judgment in favour of one Madam Felicia Ereku (Respondent) and awarded N5 million as “general damages” against the New Jerusalem Church of God, Warri (Appellant) in the land dispute.

One of the jubilating members of the church, Mrs Charity Emuobosa Ekpiwhre Esq, who claimed she was born and christened in the church, said the land was bought from the family of the Respondent in 1968.

She noted that they had occupied the land without any opposition and harassment until suddenly a court judgement was executed on the church by one Mr. Victor Omare Ereku 23 years after.

While thanking God for the victory on behalf of the church, Apostle Felix Useh lauded President Muhammadu Buhari for sanitizing the judiciary, adding “That’s why this judgment that has been given to the church took place because the judiciary has been overhauled.”