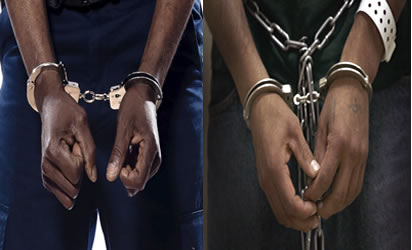 Idris Sodiya and Sodiq Odebiyi of no given addresses were arraigned at Magistrates’ Court in Isabo, Abeokuta on Wednesday  charged with fondling breast.

The accused are facing a three-count charge of felony, breach of peace and assault.

The prosecutor, Sgt. Idowu Ogunleye, told the court that the accused committed the offences on Nov. 27 at about 7.30 a.m. at Leme area in Abeokuta.

According to Ogunleye, the accused assaulted and touched the breast of one Miss Rasheedat Adesina, student of Lisabi Grammar School.

She said the accused, on Nov. 28, conducted themselves in a manner likely to cause a breach of peace by disturbing the peace of the school.
The prosecutor said the offences contravened sections 516, 360 and 248 of the Criminal Code Vol. 1, Law of Ogun, 2006.

The duo pleaded not guilty to the charges, News Agency of Nigeria (NAN) reported.

The Magistrate, Mrs Fatimat Ojelade, granted the accused bail in the sum of N100,000 each with two sureties each in like sum.

Ekiti 2018: I don’t know my political platform yet – Fayose