Dickson, beacon of hope of a new Nigeria ―Ekweremadu 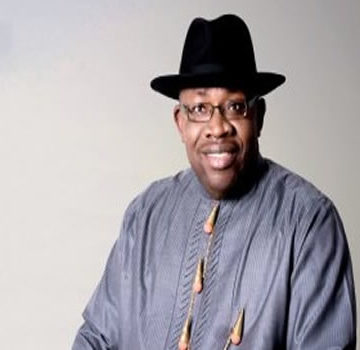 THE Deputy Senate President, Senator Ike Ekweremadu over the weekend described Governor of Bayelsa State, Honourable Seriake Dickson as a beacon of hope for a new Nigeria.

Senator Ekweremadu gave kudos to Governor Dickson during the commissioning of the House Officers and Interns Quarters, for the Federal Medical Centre, in Yenagoa.

A statement by the Chief Press Secretary to the Governor, Mr Francis Ottah Agbo, said the Deputy Senate President was highly impressed with Dickson administration’s contributions towards deepening democratic principles not only at the state but also at the national level.

Senator Ekweremadu who lamented that the country’s democracy was being threatened, attributed the development to the conduct of some political leaders.

He saluted Governor Dickson’s courage for defending and promoting democracy, describing him as a man whom God has brought to make a positive impact on the lives of the people.

Senator Ekweremadu said he was proud of Governor Dickson’s outstanding achievements in the health sector, with the state-of-the-art health facilities put in place to check infant and maternal mortality rate.

“Today, I feel happy, satisfied and encouraged. A few days ago, the Senate took the whole day to debate about the worsening situation of our democracy because of the conduct of some of our political leaders. And we got worried that our democracy is being endangered not just by our statements but also by our actions.

“But today, we are here and we see a man making strong statements about democracy. So go forth from here and tell the world that democracy is working in Bayelsa State. Action they say, speaks louder words. I am happy to be associated with you both at the professional level and in this generation of politicians.

“I want to congratulate our women. Last week, we spoke about infant and maternal mortality rate in Nigeria, we also spoke about life expectancy. So when you invest in the health sector, you are going to address that and the statistics will reduce; that’s what will happen in Bayelsa.

“When I listened to the Commissioner for Health and the Chief Medical Director and yourself, I almost shed tears of joy because you represent the face of that hope in our country. So my dear people of Africa, as you return to your various countries, remember to mention that you met a man who is defending and promoting democracy in action.

“Bayelsa may seem to be geographically disadvantaged, in Nigeria but Governor Dickson is changing the narrative by opening Bayelsa to the world. Sometimes God raises a man to be the David or Moses of his time and I think God has decided to use you to change the narratives for the people of Bayelsa State.

“So your place in history is already assured, keep up the good work and be fair to all concerned. Continue on this trajectory and at the end of the day, history will vindicate you.”

In his remarks, Governor Seriake Dickson assured that Bayelsa would be a pacesetter in medical tourism, noting that government would continually upgrade its health infrastructure to meet the medical needs of the people.

According to him, the state government is taking healthcare delivery to a whole new level and urged the private sector to key into government’s policies and programmes particularly, the health insurance scheme.

“We are taking our health care delivery to the grassroots. I encourage all especially corporate organizations to be part of our health insurance programme.”

The Chief Medical Director of the Federal Medical Centre, Yenagoa, Dr Dennis Allagoa, described the medical quarters as a miracle and the largest in the South-South zone of the country. He said the project was conceived 18 years ago but was made a reality by the present administration.

Dr Allagoa who noted that Governor Dickson’s name would remain indelible in the medical history of the state, however, urged the government to ensure the completion of the parking lot and adjoining road to the hospital.