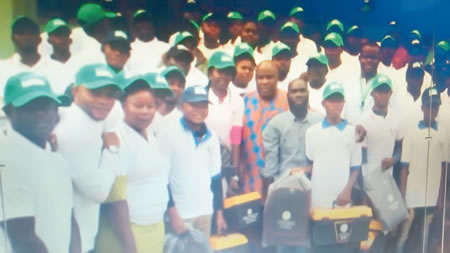 In order to curb restiveness and crime among youths in the South-West, 120 youths in Saki, Oke-Ogun zone of Oyo State, last week benefited from a capacity building programme organised by the National Information Technology Development  Agency (NITDA), the ICT policy implementing arm of the Federal Ministry of Communication saddled with the responsibility of  creating a framework for the planning, research, monitoring, regulating and evaluating information technology practices in Nigeria

The capacity building with the theme ICT Capacity Building for Youths in the South West, which was the second edition, held in Saki, part of the Senatorial District of Senator Fatai Buhari, the senator representing Oyo North at the National Assembly.

It held for five days and focused on teaching youths on self-reliance and empowerment to reduce the rate of unemployment and idleness.

The programme was based on NITDA’s belief that capacity building and development for Nigerians is important, especially in the area of technology and systems penetration to youths, women, people living with disabilities and managers in rural, urban and under-served areas.

The objective of the capacity building was to promote entrepreneurial spirit among the youths, eradicate poverty and equip  beneficiaries with the tools of technology to enhance their living standards and empower them to be independent financially.

The project is part of government’s efforts to increase the human capital development in the country and check agitations and unrest, particularly among youths, while exposing them to current use of technology to put them at par with their contemporaries in other parts of the world.

The 120 beneficiaries were taken through the rudiments of information technology and taught how to repair phones and other technological gadgets.

At the end of the programme, they were  given tools to start work, including an iPod and a sum of each to start their own businesses.

Speaking during the programme, the director general of NITDA, Mr Kashifu Inuwa Abdullahi, represented by Mr Kehinde Owopetu, charged the beneficiaries to use both the cash and the tools wisely.

He explained that the programme was to bridge digital literacy among underserved Nigerian citizens and youths, especially the artisans who have skills but lack ICT tools and training to function in the 21st century.

According to him, the training will help artisans to realize their potential in innovation and design, and link them with ICT-enabled modern tools in line with the vision of NITDA.

This he said is in furtherance of the organisation’s mandate of taking technological development to the interior and rural communities.

He explained further that the organization would continue to create technological inroads into unreached communities to ensure that no one is left behind and swept aside as the global world moves fully into the technological era.

Speaking during the capacity building workshop Senator Fatai Buhari, who was represented by Mr Afeez Kilani and Mr Olayinka Samuel of NITDA, urged the youths not to take the training as a play outlet but to continue to network among themselves to sharpen their skills and move with the times in digital trend.

“This empowerment programme is not only a means of fast-tracking development of youths but the country as a whole but one of the ways to actualise the Federal Government’s human capital development programme.