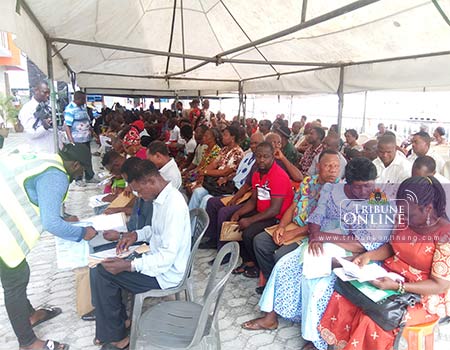 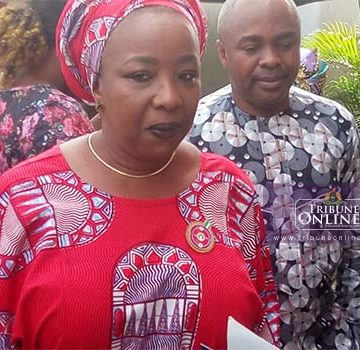 A dozen year after, respite has come the way of over 5, 000 Delta Steel Company pensioners as their verification exercise for payment has commenced at Orhuworu, Udu Local Government Area of Delta State.

The week-long exercise, being conducted by the Pension Transitional Arrangement Directorate (PTAD), started on Monday and has recorded high turnout of pensioners or their next of kin.

Elated Executive Secretary of PTAD, Barr Sharon Ikeazor, while fielding questions from journalists at Wetland Event Centre, venue of the exercise, expressed satisfaction that President Muhammadu Buhari has eventually come to the aid of the retired workers after over 12 years of hunger and privation.

“I am elated and I feel very fulfilled that our government under the leadership of President Buhari has been able to come to the aid of Delta Steel Company retirees after 12 years of neglect.

“You can see the joy amongst the people because to me, one of the greatest injustices is that a worker will serve the country, finish their work and are not paid at the end of the day.

“This government is doing all it can to ensure that it pays all the arrears being owed for the past years,” the founder of Wakiliyan Mata Empowerment Initiative for internally displaced women noted.

Barr Ikeazor disclosed that after the verification exercise might have ended, the pensioners would receive alerts of payment directly from the Central Bank of Nigeria (CBN).

“Payment usually commences four months after verification because the data and the documents we collected in the field will be sent to Abuja headquarters for quality assurance and also federal auditors who are situated in our office.

“These are the things we do before payment can be made. And here (DSC), we are expecting over 5, 000 workers to be verified.

“So you can see the magnitude of work to be done. In the next four to five months, we are assuring the pensioners that they will get paid,” she reiterated.

Barr Ikeazor also debunked an allegation that already verified pensioners were not being paid 33 arrears owed them, saying “we have those who will continue to cry wolf where there is none.”

She explained that the inter-ministerial committee and pension liabilities set up and headed by the Minister of Finance and herself as secretary just last week released money for part payment of the 33 per cent owed pensioners from the military and the police.

“Pensioners have already started receiving payment of the 33 per cent. We have paid six months for the civil service commission, six months arrears for the service mentioned, for the police, we paid 12 months and they have all received the monies,” she noted.

Meanwhile, House of Representatives pension committee member, Honourable Samuel, who accompanied Barr Ikeazor for the exercise, expressed gratitude over what he described as the ‘restoration of dignity to the people that have contributed their quota to the development of our country.’

He commended Barr Ikeazor for the smooth exercise devoid of rancour and the provision of refreshments for the pensioners who themselves had shown maturity and patience while the exercise lasts.

One of the pensioners, Mr James Otuabola, in ecstasy, said: “what is happening today is a blessing to DSC staff, these workers have been suffering for decades without payment, but President Buhari has come to our rescue, he’ll not die.”

Chairman, the National Union of Pensioners (NUP), DSC Chapter, Mr Matthew Akpoteghor, expressed relief that 12 years of neglect, suffering and marginalization has come to an end through the benevolence of President Buhari and Barr Ikeazor.

PTAD, it will be recalled, was established in 2013 by an act of parliament to manage the old pension offices for pensioners who retired on or before June 2007 and did not transit to the new Contributory Scheme.

Nasarawa govt to embark on renovation of NYSC hostels