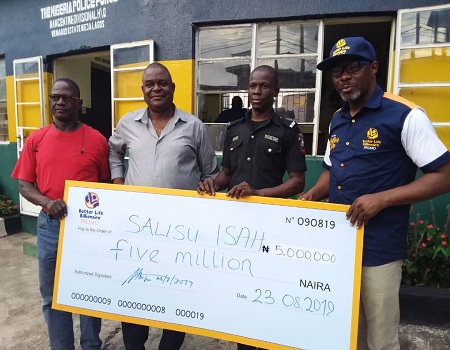 The Better Life Billionaire promo, a first of its kind gaming programme, last Friday, produced 10 lucky winners in its first weekly computerised draw held in Lagos. The draw was witnessed by representatives of the Lagos State Lotteries Board and the National Lottery Regulatory Commission.

Some of the winners, when called on the phone, expressed much excitement and uncontrolled emotions given their sudden change of status enabled by the Better Life Billionaire promo.

“Wow, is it for real?”, exclaimed Nwokolo Izuka Jeffrey from Asaba, Delta State.

Speaking at the draw, the Director-General of the Better Life Billionaire Promo, Mr. Celestine Achi, said the idea behind the promo is to empower Nigerians financially and alleviate poverty irreversibly among individuals and provide infrastructure for communities. Mr. Achi said the promo has introduced features of additional care, support, and guidance into the prize-winning which will enable the winners to sustain and grow their new wealth, thereby ending the trend of mismanagement of prize winnings and the inevitable return to poverty by winners. He urged Nigerians to take advantage of the BLB promo to change their status by playing for the weekly draw of N5million or the grand prize of N200million.

The weekly draw will hold every Friday for the next 11 weeks followed by the final draw.

To play MTN users are required to text BLB to 5453 while others except for Glo, are required to dial *5453# to play with either N200 to stand a chance of one the winners of N5m for 10 participants every week or play with N500 to win the mega prize of N200m at the end of the draw.