A year after previous arrest, suspect back in SARS cell over stolen cars 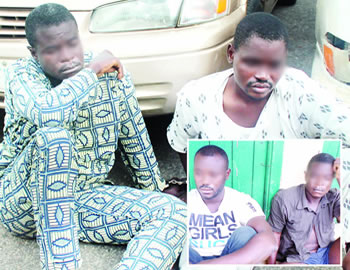 KEEPING date with destiny is usually viewed in a positive light, but for 43-year-old Akodu Sunday, June 30, 2015 and June 30, 2016 are days that form part of a negative history in his life.

On the previous date in 2015, he was arrested by the Special Anti-Robbery Squad, Ibadan, Oyo State Police Command, for going to Ondo State with his gang members to steal a car.

Though later arraigned in court in September 2015 but granted bail in an on-going case, Sunday is currently a guest at the Special Anti-Robbery Squad, this time around, the Oyo/ Ogbomoso annex, and was shown to journalists last Thursday, the anniversary of his last arrest.

Crime Reports learnt that Sunday, who seemed unrepentant, was arrested with another suspect, Lawal Usman (31), following what the state Commissioner of Police, Leye Oyebade, termed credible intelligence about the activities of a criminal gang which specialised in snatching posh cars at gun point.

Crime Reports gathered that the two suspects became friends after they met in SARS cell in 2015.

In an interview, Sunday expressed regrets that he had fallen back into crime, saying that the move was a great mistake because he had made up his mind to live a decent life after his 2015 experience.

According to the suspect, “it was one Festus who in February this year brought a vehicle to me that he wanted to sell it. I knew Festus when I was still living at Felele area of Ibadan and was aware that he was into car theft but he told me he had stopped. I didn’t know he stole the one he gave me. He told me it belonged to his brother.

“I called someone and he linked me with another person who needed a vehicle. I linked the buyer with Festus but since February 5 when the transaction took place, Festus refused to give me the commission he promised. I have not seen him since then. I don’t know how police got to know that I was involved. The police came to arrest me in my shop at Eleiyele on June 20.

He further disclosed that “I was once arrested on June 2015 for removing a car from where it was parked in Ondo State. I went with Olu and Jungle and we sold it to Sola Adenle. Sola and I were arrested and charged to court. I was granted bail but the case is still in court. I met Usman in SARS cell in 2015. I was the one who told him that someone had a car to sell. I didn’t know things would turn out this way.”

The second suspect also said: “I am a driver to one Alhaja. I introduced her to Sunday, telling her that he was into car sale. When she said she wanted to buy a vehicle, I asked her to call the man. They negotiated the price and Alhaja sent money to his account.

‘For a long time, he didn’t bring the vehicle. Any time she spoke to him on phone, he would just give excuses. That was how Alhaja told me that she would get me arrested because I was the one who knew and introduced the man to her.

I knew Sunday while in SARS cell in 2015. I was arrested when I bought a vehicle that was discovered to have been stolen.”