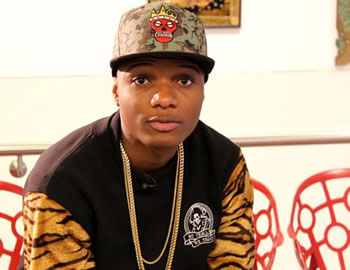 Wizkid is a global super star no doubt; such that even American-Nigerian rapper, Wale, raised eye brows when Wizkid was lauded as the first Nigerian to top international ratings. Wizkid was featured in ‘One Dance’, one of the songs on the Drake’s ‘Views’ album, which went on to become the number one song on BillBoard’s top 100 songs. He also recently did a song with British-Nigerian, Tinie Tempah on the latter’s latest single ‘Mamacita’.

From grabbing top spot for his feature on Drake’s album, ‘Views’, touring alongside Chris Brown on an international concert titled ‘One Hell of a Nite tour’ in Amsterdam to hanging out with the present big names on the international music front, the boy from Ojuelegba has become an African mega star. Today, Wizkid is globally acclaimed and accepted.

Taraji P. Henson, American movie star, admitted her addiction to one of Wizkid’s song via her Instagram page. The Empire star said she loved listening to ‘Caro’ and started following the Ojuelegba crooner on Instagram.

The 25-year old Afrobeat musician hit limelight after his debut single ‘Holla at Your Boy’ was widely accepted by music lovers. Since the beginning of his career, he has been known for various hit tracks and has won several awards with 103 nominations and counting.

He comes from a large family and is the last of six children. He kicked off his singing career at the early age of 11 when he recorded his first song with one of Nigeria’s celebrated music icons, OJB Jezreel.

He went on to record a 7-track album, which he released in his church in Lagos, under the name of Lil’ Prinz; this was just a stint that earned him a remarkable deal of encouragement and recognition from family, his church and other artistes.

Years later in 2006, with a new stage name, and a passion for making music and God-given talent, Wizkid got back into the studio to hone his craft. He continued to develop as a singer and songwriter by working under some of Nigeria’s biggest musical names such as OJB Jezreel, Naeto C, Ikechukwu and many others. Over the next few years, his talent as a singer and songwriter became evident and it resulted in him being prominently featured alongside some of the biggest artistes in the Nigerian music industry to much critical and commercial acclaim.

2009 would prove to be Wizkid’s break-out year, as his collaboration with M.I on ‘Fast Money, Fast Cars’ on the ‘Talk About It’ album drew major attention to his distinct voice, singing style and penchant for great songwriting. He went on to feature on Kel’s ‘Turn by Turn’, the and many other high profile projects.

He also got signed to Banky W’s Empire Mates Entertainment, and featured prominently on Banky’s ‘The W Experience’ album.

In 2010, he released his first singles, ‘Holla at your Boy’, ‘Gidi Girl’ and ‘Ori Mi’ with label mate, Skales; then there was the hit song, ‘Tease Me’ which was just a studio freestyle that got leaked online and turned into a big hit in different parts of Nigeria and among Nigerians worldwide.

From then onwards he has not looked back. Despite leaving Banky’s label and setting up his own platform under the imprint, ‘Starboy’, Wizkid, at his young age, has built a brand that has put Nigeria on the world map as regards Pop and Afrobeats evidenced by his sold out concerts all over the world. Today, playlists of Nigerian music, especially in the United Kingdom and other parts of the world would not be complete without Wizkid’s songs. With a team and managed by respected music enterprenuer, Sunday Are, Wizkid is surely on the path to greatness.

Internet streaming: Now the world is dancing to ‘Afrobeats’

Entertainers and the‘fake it to make it’ syndrome