Who Moved My Cheese?

Book Review
By Kenneth Blanchard and Spencer Johnson On Aug 26, 2019 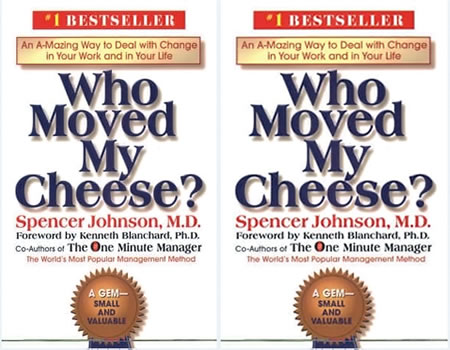 Who Moved My Cheese? By Kenneth Blanchard and Spencer Johnson is a small book arranged in three parts: a fable wrapped between two made-up conversations.

The story is simple. Once, long ago and far away, there lived four little characters who ran through a maze looking for cheese. Two; Sniff and Scurry, were mice. The other two; Hem and Haw, were little people. Each eventually found his favorite type of cheese at the end of Cheese Station C. When the cheese supply ran out, Sniff and Scurry went right into action looking for new cheese, because they had never abandoned their animal instincts. Hem and Haw, in contrast, waited around at Station C, complaining about their bad luck.

Sniff and Scurry finally found new cheese, but Hem and Haw stayed put in Station C hoping something would change. Finally Haw realized how ridiculous his behavior had been and left Hem alone in order to search for new cheese. For a long while, he had no success. Sometimes, he doubted he would ever find it. But then one day, when he had wandered far into an unfamiliar part of the maze, he came upon new cheese again.

Like any good fable, Who Moved My Cheese? can be read in many ways. However you read it, one idea stands out: To be successful in life, you have to keep moving.

That’s not a very popular idea. Most people want to do as little moving as possible. They show up for work and then . . . well . . . not much happens. It’s as if they think life is a contest and he who gets away with doing the least wins.

I do think life gives us two choices. We can get through it doing as little as possible. Or we can work hard and try to build something.

Who Moved My Cheese? posits a world where success and happiness are the byproducts of work. When it comes to making money, building business, and creating wealth, prosperity, and value nothing works like work.

Who Moved My Cheese? reminds us that we can’t stop moving. That we must always be pushing, always be trying new things, and always be ready to change.

Businesses that stagnate will degenerate. Businesspeople who don’t keep moving will eventually fail. Think of yourself as a shark. If you stop going forward, you die. Yet, so many businesspeople find a limited amount of success and then stop.

Something You Can Promise Yourself . . .

Don’t be satisfied with your product/service. However good it is, there is some way to make it better. Speak to your customers. Consult with experts. Examine it yourself. Find some way to improve it. And when you are done, do it again.

Do the same thing with your marketing. Create a successful promotion. Then the moment you know it’s working, start looking for another one to replace it. Spend the money. Devote the time. Believe that the end is nearer than you expect. It usually is.

And with your business plan, expect change too. Anticipate that your customers will change. They will become richer or poorer, older or younger, smarter or dumber, cooler or lamer. Know that your employees will change too. They will move or quit, become disenchanted or enchanted elsewhere. Same thing with your vendors, consultants, and colleagues.

This is the process that leads to finding new cheese:

Four leadership situations that can destroy your organization

How the mighty fall