How wanted kidnapper died in shootout with OPC members 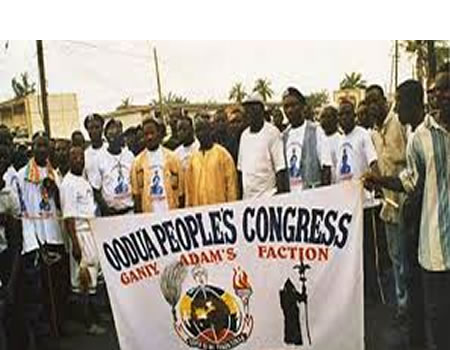 More insights have emerged on how the notorious and wanted kidnapper, Timi alias Fish, who threatened to kill a divisional police officer was killed during a battle with members of the Oodua People’s Congress early Tuesday.

Fish, who was killed during a gun battle with OPC member around Ola Inu Kan area of Ishawo early Tuesday, had reportedly led a gang that killed an OPC member during a shootout last year.

It was gathered that, Fish, who was a former pipeline vandal, resorted to armed robbery and kidnapping around Ishawo, Asolo and other parts of Ikorodu.

It was gathered that Fish had some months ago threatened to kill a divisional police officer in Ikorodu was on a mission to assassinate one person and abduct two others, when he was killed.

A source in the area told the Metro that “he {Fish} was well known to many members of the OPC in Ikorodu West. We have had an encounter with him, when we rescued two people from his gang.”

The source added that “His gang was about taking two abducted people away last year, when our members from Ola Inuk an zone engaged them and rescued the people but we lost one of our members”

Another source, who is very close to the OPC, said “between Monday night and early Tuesday, he invaded a community but unknown to him, the OPC members had replaced the Hausa guards there.”

“He had earlier attacked that community before. His gang tied the Hausa security men on guard and raided the who community for hours” the source stated

He added that “When he got to the community on Tuesday, he met two OPC members and told them that he was not there for them and that he had not time for them and they allowed him and his gang members to go.”

Unknown to Fish and his gang, the OPC members had mobilized members in the area and a manhunt was reportedly launched for him and he was traced to a building in Ola Inu Kan.

“When we got to the area, he was already inside one of the buildings but yet to gain an entrance into the main building” an OPC member, who pleaded anonymity, told the Metro.

The coordinator of the OPC in Ikorodu West, Dada Olugbenga, while speaking on the death of Fish described him as “a thorn in the flesh not just to the residents but also to OPC members”

The OPC coordinator said that Fish and his gang members engaged his group in a very fierce gun battle, before he was finally killed, while other members of his gang escaped with bullets wounds

“He had a clear mission to kill someone and abduct two other persons but we saw that as an opportunity to put an end to his criminal activities. He was a wanted criminal.”

The Lagos State commissioner of police, Fatai Owoseni had on Tuesday confirmed the death of Fish to newsmen, while parading suspected criminals, who were arrested in the state.

CDNDC says EFCC is a mess under Magu, calls for reforms