Veteran broadcaster, Olasope, to be buried with microphone ― Son 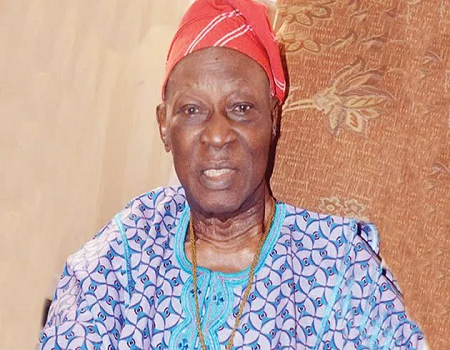 Mr Oladipo Olasope, the son of the late veteran broadcaster, Kunle Olasope, says his father will be buried with a microphone in his casket.

The younger Olasope, a Senior Advocate of Nigeria, disclosed this while speaking with the News Agency of Nigeria(NAN) in Ibadan on Friday.

NAN recalls that the late Efon-Alaye Ekiti-born legendary broadcaster died on Oct. 6 at 82 in Ibadan during a brief illness.

The late broadcaster was the first male face and voice on television in Africa when Western Nigeria Television was established in Ibadan by the Western Regional Government under Chief Obafemi Awolowo.

“My dad was the first to appear on television in Nigeria and I feel highly privileged to be his son. He was never a broadcaster by mouth but in spirit and truth. All those he mentored can attest to this.

“That is why he said he wanted to be buried with a microphone. I am going to get a microphone which I will put in his casket by the time we want to bury him because that was his wish.

“He is being immortalised for broadcasting because he devoted his entire life to broadcasting. He loved the job too much,” he said.

He said that his father never retired as he constantly wrote in newspapers, granted interviews, placed adverts for companies and anchored radio programmes till his last moment.

Olasope told NAN that one of the critical things his late father did till the last minute was mentoring broadcasters, saying one can never retire from mentorship.

“My dad do write in newspapers and come to Ibadan for radio programmes. He only stopped working for Splash FM probably three or four years ago.

“He used to anchor a programme every Sunday on radio where he described himself as the ‘Young Old Man Kunle Olasope’ and the programme has lots of followership,” he said.

The legal luminary described his late father as a highly intelligent man whom he sometimes referred to as ‘My Google’ for supplying him information whenever he was lost and needed such.

Recounting his last moments, he said his late father was in the hospital for a week and two days before his death, having suffered a few complications from diabetes.

Olasope said that his father had been a diabetic patient since age 58, but was very positive of surviving while at the hospital.

ALSO READ: How I discovered John Momoh in Abeokuta —Olasope

“Once in a while, he had little complications but overcame them.. But this time around, he was unable to get out of it. We spoke with him throughout his stay at the hospital except the last two days.

“The last day he died, I got to the hospital and the doctors asked me to talk to him that he could hear what I am going to say. I went to the side of his bed and spoke to him.

“I told him that there was nowhere he is going at this time because the agreement we have is 85 and not 82. I wished him safe recovery in everything and I am sure he must have heard that,” he said.

The legal luminary disclosed that his late father had consistently said he would only die at 58 or 85 years,.

“He had consistently said that he would only die at either 58 or 85 years. He said that the years of his death must have eight or five, but man proposes and God disposes.

“He died on the sixth day of the 10th month. Those two days have no correlation with eight and five, but he was 82. At least there is eight,” he said.

He said that his father had after he left the hospital suffered a first stroke and was successfully revived, adding he died after the second stroke in spite of efforts to revive him.

The younger Olasope said that a commendation service would be held for the deceased at All Souls Church, Bodija, Ibadan on Oct. 30.

A Christian wake would hold on Oct. 31 at his residence in Efon Alaye, Ekiti.

The burial service and internment would be held on Nov. 1 at St. Pauls Anglican Church, Adagba, Efon Alaye, Ekiti

AG calls for reduction on cost of governance in Nasarawa