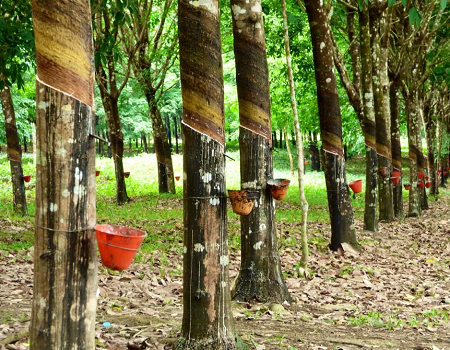 As part of efforts to boost the Nigerian economy, government at all levels have been asked to prioritise rubber farming because of its tendency to become a major foreign exchange earner.

Ogun State chairman of National Rubber Producers, Processors and Marketers Association of Nigeria (NARPPMAN), Oladele MacDaniel, appealed to both the federal and state governments to prioritise rubber plantations in the country above other agricultural commodities.

The chairman made the appeal shortly after the inauguration of executive members of the association in Obafemi-Owode and Ifo local government areas of the state.

While pointing out that rubber farming could assist the country in recovering from its economic challenges, MacDaniel added that the government should make it a major export commodity so as to get more Internally Generated Revenue for the country.

MacDaniel said: “Cocoa too is an export commodity, but cocoa is seasonal. Rubber is not seasonal; you tap rubber every day from January 1st to December 31st. Rubber is a daily thing and you process it every day.

“No individual can finish rubber plantation. The quality is always the same irrespective of the year you have tapped it.

“We are calling on the Federal Government to actually give priorities to rubber. Out of all the agricultural commodities, there is none that can be compared to rubber. Rubber should be given priorities ahead of every other one. Cotton is seasonal, oil palm is seasonal, cashew is seasonal.

“In rubber plantation of about 10,000 hectares, we will be making up to 400 tonnes every week. And that is huge money that would assist the economy.”

The state chairman urged Governor Dapo Abiodun of Ogun State to give members of the association 20,000 hectares of land for plantation while commending governors of Osun and Ondo States who have made similar gestures to rubber farmers.

MacDaniel said, “we don’t have a problem in processing or exporting. The challenge we have is land. We need land to plant rubber, rubber will create employment.

“Osun State has given the association 20,000 hectares of land and they will be paying rent annually. Ondo State has done likewise, they have given 10,000 hectares to NAPPMAN and we are hopefully believing that Ogun State will do the same.

“We have not met with the governor, but we believe that by the time we meet with him, we will get land up to 20,000 hectares which we will distribute to our members to plant on.

“We are hopefully believing that government that is now shifting from reliance on oil to agricultural products will give us enough assistance to be able to plant. We need plenty of lands and plenty of assistance, land is just our major challenge,” the chairman said.