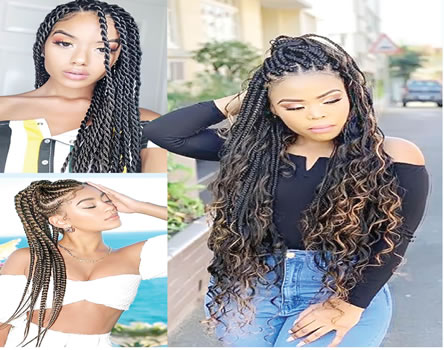 The tribal braids date back as early as 3500 B.C and they have successfully crossed over several millennia even to the digital age; even young girls nowadays are finding ways to make their tribal braids more beautiful by wearing them in ponytails and buns and also adding rings, beads, cowry shells and so on.

Middle part tribal braids: Just like other middle-part hairstyle, this type of braids suit round and oval face shapes. This is because the eye is drawn to the centre of the face as a result of the parting, therefore, making the face slim and long.

Senegalese tribal braids: Also known as Senegalese twists, these braids have a signature silky, rope-like look that adds a stylish touch to any look. Technically a twist rather than a braid, the style originated in the West African nation of Senegal and first became popular worldwide in the early 2000s.

Long/short tribal braids: The long braids are perfect for women with naturally long hair. However, they can also be created with extensions.

If you have shorter hair and would prefer to go without extensions, try a chin or mid-length tribal style. You can also try a centre or side-parted Senegalese twist braid style.

Tribal braids ponytail: For that special occasion or if you want to give your tribal braids a modern and chic twist, style them up in a ponytail. To create this, gather the braided hair up to the crown of the head. Avoid pulling too tight so as not to lead to breakage, then take two or three braid strands and wrap them around the base of the ponytail, looping them through to hold the other braids in place.

Feed-in braids: Here, a knotless technique is used to add extensions to the natural hair, creating longer and thicker and fuller braids. The feed-in braids put less stress on the scalp because no knots are required. This makes them an even more protective style for the natural hair.

Tribal braids with colour: A colour like ombre pink or purple will give your tribal braids an afro punk edge and will make you stand out from the crowd. If you are scared of your natural hair being bleached, then the safe way is to get an already dyed extension.

Tribal box braids: Although they have been used for centuries, box braids became popular in the ‘90s when popularised by musician Janet Jackson. They are predominantly popular among Africans and African-Americans. Box braids are best described as protective styles and they are “boxy”, consisting of square-shaped hair divisions.

Tribal braids with curly ends: For a beautiful and free-spirited look, leave the ends of your tribal braids loose and curly and for best results, try pairing curly ends with long, thin plaits.

Our revenue from cocoa, sesame grew by $232.4 million in one year —Buhari

Basic style rules for every woman

Up your game with ‘boyfriend’ outfits

What Are The Most Common Allergies In Skin Care Products