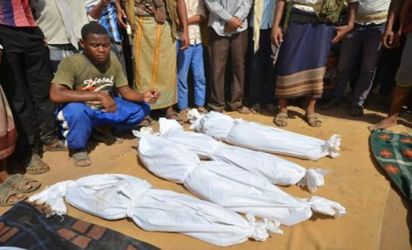 Saudi-led warplanes killed at least 82 people when they struck mourners three times,  at a hall in the Yemeni capital Sanaa on Saturday.

Among the people killed was the Mayor of Sana’a, the capital, Abdulkader Hilal.

said, but the coalition denied any role in the incident.

Ghazi Ismail,the acting health minister in the Houthi-run administration also said that 534 other people were wounded in the air strikes in the southern part of the city.

A wake was taking place for the father of the administration’s interior minister, Jalal al-Roweishan, who had died of natural causes on Friday.

The death toll was one of the largest in any single incident since the Saudi-led alliance began military operations to try to restore President Abd-Rabbu Mansour Hadi to power following his ousting by the Iran-aligned Houthis in March 2015.

“The Saudi aggression committed a major crime today, by attacking a mourning hall for the al-Roweishan family, targeting residents in the hall. As a result, 534 were wounded and 82 were martyred,” Ismail told a news conference in Sanaa.

Sources in the Saudi-led coalition said there was no Arab coalition air role in the strike.

“Absolutely no such operation took place at that target,” one of the sources said, citing what he described as confirmation from the coalition air force command.

“The coalition is aware of such reports and is certain that it is possible that other causes of bombing are to be considered. The coalition has in the past avoided such gatherings and (they have) never been a subject of targets.”

The Saudi-led coalition has been providing air support for Hadi’s forces in a civil war that has killed more than 10,000 people since March 2015 and displaced more than three million.

Fighting has intensified since August when U.N.-sponsored peace talks in Kuwait ended without an agreement.

Iran, Saudi Arabia’s main regional rival, described the attack as “a horrific and inhuman crime”, and called for the resumption of peace talks among all Yemeni parties.

“To resolve the crisis in Yemen there is no solution but the end of aggression by the brutish Saudi rulers and start of new round of talks that includes all Yemeni sides,” Iran’s Foreign Ministry spokesman, Bahram Qasemi was quoted as saying by Tasnim news agency.

Residents said the aircraft fired two missiles at the hall, where hundreds of mourners had gathered to offer condolences.

One missile tore through the building, setting it on fire and sending a large plume of smoke above the area. The other landed nearby.

Witnesses described a scene of carnage, with charred or mutilated bodies strewn around. Ambulances raced to carry the wounded to hospitals, which sent out urgent appeals for blood.

A spokesman for Yemen’s Houthi group condemned the strike as an act of savagery.