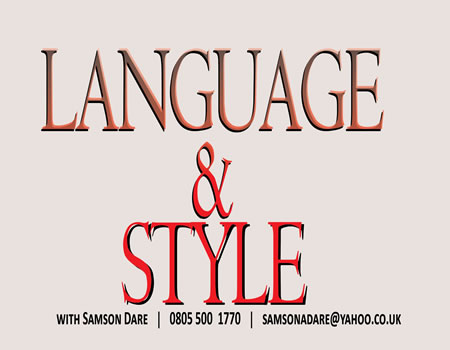 SAMPLE 1:  “Akinyemi, a chieftain of the pro-democracy group—the National Democratic Coalition (NADECO)—in its heyday, said there is no basis for such opposition to the conferment of the honour as there is already some precedence.”(June 12: Abiola’s Rival Tofa Kicks as ACF Backs Buhari, The Nation, 10 June, 2018)

To reiterate, the context has given us an idea of what the reporter intends the word precedence to convey: an action or a decision which, by virtue of being a historical example, could be a basis or an inspiration or a source of encouragement for future decisions or actions; if we did it successfully in the past, what possibly could make it a bad action or decision now?

The word required in the context is not precedence but precedent. The two words look alike but they are clearly semantically different. Let’s illustrate the word precedent in sentences: 1) Granting a loan to a person servicing a previous loan will be creating a bad precedent. 2) The government refused to pay the striking workers because, according to it, it would set a precedent that would be difficult to break from. 3) Citing numerous precedents, the lawyer urged the court to release his client on bail. 4) Even if there is no precedent, the company can set one by paying the hospital bill of its worker who sustained injuries in the course of his duty. 5) Although there is no precedent for releasing the official car to a person going on leave, we will be willing to do it provided you will be willing to cut your leave short as soon as your attention is needed. 6) Without any precedent, the military Head of State just transformed to a civilian president.

As for precedence, it is about priority, order of importance. Now let’s read the following sentences: 1) It is the duty of the Protocol Officer to ensure that dignitaries sit in order precedence. 2) We have come to a time when our higher institutions should give precedence to science and technology. 3) It was a show of shame as government officials fight over precedence in public. 4) In our family, education takes precedence over material possessions. 5) In defending his decision to keep the patient in the hospital, the doctor claims that the patient’s health takes precedence over other matters. 6) Political independence of a nation should take precedence over its economic strength even though politics and economy are inseparable.

At any rate, it should be clear that the appropriate word for the context is precedent.

Sample 2: “Umar was accused of collecting N10m from Rasheed Taiwo, a former Customs official who was facing false assets declaration charges before the Code of Conduct Tribunal sometimes in 2012.” (Onnoghen to Ask CCT Chair to Disqualify Self for Alleged Fraud, Sunday Punch, 3 February, 2019)

The word that interests us is sometimes, which occurs in the phrase, “sometimes in 2012.” We have had cause to comment repeatedly on the arbitrary nature of part of the English spelling system, noting that a single letter may be the only meaning-bearing signal constituting the difference between two words or between two variants of the same word. Such is the case with the forms sometime and sometimes, the former being the appropriate one in the context in which the writer has used the latter.

As should be obvious, the only visual difference between the two words is the presence of the letter –s in the one, which is absent in the other.

The word sometimes (please note the final –s) means occasionally, on occasions, once in a while: (1) Even the most educated people are sometimes confused as to the difference between the words “sometimes” and “sometime”. (2) I sometimes have this feeling that the end of the world is near. (3) Surprisingly, it sometimes rains in December. (4) Dull and incoherent as he is, he sometimes springs surprises by making brilliant points. (5) In spite of themselves, people in power sometimes show compassion. (6) Climatic changes usually occur gradually, but they sometimes occur suddenly. 7) Even highly educated people sometimes spell words wrongly. 8) Situations can be so bad that you sometimes wish you were not born. 9) Under satanic influence even the most religious people sometimes succumb to horrible temptations. 10) She is generally calm and sedate, but sometimes throws a tantrum.

The word sometime (without a final –s, mind you) means at a time in the past or future about which you are not certain: (1) Sometime in 1962, horrendous violence broke out in Western Nigeria. (2) We can hold the meeting sometime towards the end of the week. (3) I saw him last sometime in January. (4) You can take your leave some time before the Christmas/New Year break so that it can run with the break. (5) The impression the government gave some time in 2008 was that the remaining subsidy on the prices of petroleum products had been removed. (6) There was a prophecy, sometime before you were born, to the effect that you would be a great man. 7) The news of General Abacha’s death was broken to Nigerians sometime in 1997. 8) We can discuss this matter sometime next week. 9) The protest took place sometime last year.

Please note that the word sometime can be rendered as one word or as two words. The important point to note about the difference between sometimes and sometime is that the presence or absence of the letter –s is of great significance. When you mean occasionally or once in a while the letter –s must feature. It is obligatory. It is not a cosmetic element. On the other hand, when you mean that something happened at a time in the past or will happen in the future at a time about which you are not sure, never make the mistake of including the letter –s.

At any rate, the word sometime should replace sometimes in the context under review.

Ones and Once (i)

Haven, Haven’t, and Having Revisited (ii)