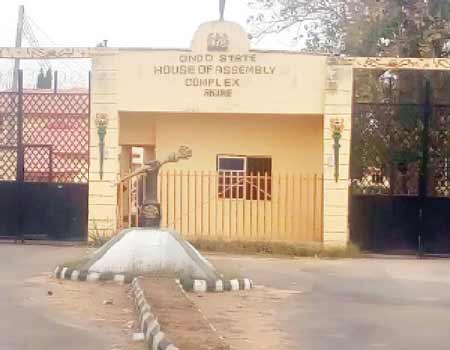 FOLLOWING the directives from the Inspector General of Police, Ibrahim Idris, ordering the closure of the Ondo State House of Assembly complex over the crisis that erupted over leadership tussle, the State Assembly was on Monday sealed with security operatives keeping vigil at the complex.

To this effect, the State Police Command, has deployed its men to the Assembly complex to keep off both faction of the lawmakers who have been laying claim to the leadership of the House.

Tribune Online reporter who visited the House of Assembly saw policemen taking positions while an Armoured Personnel Carrier (APC) was stationed at the entrance of the House, complemented with about 10 Hilux vans belonging to the state Police Command.

Some members of the public who have no business in the complex were turned back by the police while some workers of the state Assembly were frisked before gaining entry into the compound.

However effort to speak with the State Police Public Relations Officer (PPRO) Femi Joseph, on the development was not successful as all calls to his mobile phone were rejected.

Meanwhile, Nigerian Tribune gathered that the 13 aggrieved lawmakers led by Malachi Coker have relocated from the state to Ibadan, Oyo state capital.

A source close to the lawmakers said the relocation became imperative because of the safety of the lawmakers and said the 13 aggrieved members of the Ondo state House of Assembly will return to the state after the dust settled.

However, the Speaker elected by the aggrieved lawmakers, Malachi Coker, confirmed the indefinite sealing of the Assembly complex on the order of the IGP.

He said “For now, the Inspector General of Police, Mr Ibrahim Idris, has directed that the Assembly should be locked.

“On Friday, Feb, 3, the police brought a warrant that the Assembly should be locked indefinitely and that was after the House had adjourned its sitting at a plenary held on Thursday, Feb. 2.

“We hope the police will not be bias in their actions by allowing the impeached Speaker’s faction to have access into the Assembly.”

The Assembly, had on Friday, Jan. 27, impeached the Speaker, Ms Jumoke Akindele, and two other principal officers of the house over allegation of N15 million fraud.