by Tribune Online
in The South West
Reading Time: 8 mins read
A A

As part of activities marking his sixth anniversary in office, Governor Abiola Ajimobi of Oyo State kicked off diverse projects, a huge percentage of which revolve around road construction, reconstruction and expansion. The magnitude of the projects has however given rise to concerns that the governor may not conclude the projects before he leaves office, a fear that the government continues to allay. YEJIDE GBENGA-OGUNDARE reports.

It was a commemorative event on June 16, 2017, when the Oyo State Governor, Senator Abiola Ajimobi officially flagged off the 32km first phase of the Ibadan Circular Road at Badeku village, off Ibadan-Ife Expressway, to serve as the epicenter of development in the state as part of activities marking his six years anniversary in office as the governor of the state.

The flag off came few days after the governor inaugurated a 14.6km road projects which covers the 3.2 km Oke AduAgodi-Idi Ape road interchange and the dualisation of the 11.4km Agodi- Gate-Alakia Adegbayi junction with spur to Alakia-Ibadan airport road.

This is in addition to other ongoing road projects across the state; Eleyele-Ologuneru-Akufo Road, dualisation of the 9.7km Saki township road along Oke-Ogun Poly, Ilesa-Ibaruba Road, Idiape-Bashorun-Akobo Road. And the government attributes the administration’s passion to road construction to the vision of changing the history of cheap quality road and poor road network.

The government prides itself on the successful completion of the transformation flyover at Mokola, the restoration bridge along Secretariat-Bodija road which has helped to stem flooding and other hazards in the area, improved network and better quality of roads; Challenge, Alesinloye, Dugbe-Magazine-Eleyele, dualisation of entry roads into six major cities within the state totaling 35.6km, successful construction of 183 roads and seven bridges totaling 590km, road repairs, rehabilitation and maintenance of about 850km.

Today, the biggest of the road projects is the Circular Road which is expected to gulp an estimated sum of N70billion naira. The 32km first phase of the 110km road which starts from Badeku village will end at Ajanla village on the Lagos-Ibadan Expressway, representing the Northeast end of the project and is expected to be completed in 18 months that is before the expiration of the governor’s second term in office.

The other stages of the circular road include the Northwest side with 33km, Southwest corner with 24km and the Southeast end with 20.8km. And the first phase which has commenced includes the provision of hydraulic structures, lined drains, culverts, three bridges, two interchange flyovers, the pavement of lateritic sub-base of 200 millimeters, three security posts, two filing stations and street lights among other structures.

Many have asked why the government came up with the idea of a road that will gulp huge sums of money at this period in view that there are many projects already in the blue print that could be executed. To them, such a project is likely to be abandoned before long in view of the paucity of funds which state governments across the federation complain of.

They are particularly bothered that with the demolition of structures already ongoing, it will be bad if the project stops along the line while many people’s lives are already affected.

Bunmi Aina, a trader whose shop is affected by the demolition across in Iwo road expresses the fear that many may have lost their businesses for a project that is going nowhere. “It is given that when a project of this nature comes up, structures on its part must give way. But my concern is that after demolishing houses and businesses, the project will stall, meaning many would have lost their homes and businesses in vain.

“Go around and see, from Idi Ape to this point, then to Akobo on the other side, many homes and businesses are gone. Where will government get money to do the roads and pay compensation during this recession that it is struggling to pay workers wages? I am afraid that this loss will just be in vain,” she told Nigerian Tribune.

The government has however continued to reinforce its commitment to ensuring the success of the project which it reiterated was not an overnight decision but a long term project that had been in the pipeline long before the present administration in the state. The Ibadan Circular Road originated from the findings of an inter ministerial committee put in place in the year 2000 by the administration of Alh. Lamidi Adesina.

But in 2007, the Adebayo Alao-Akala administration cancelled the project and substituted it with another one. But the Ajimobi administration in pursuance of its transformation agenda identified the project as important to its transformation of Oyo state to a modern town. The government had in the last six years started work and deliberations on ways of ensuring the Circular Road becomes a reality in pursuance of providing solution to a modern inter-city traffic congestion solution especially for the developed commercial urban center of its dream and opening up a new economic corridor for controlled development in line with the Ibadan Master Plan. 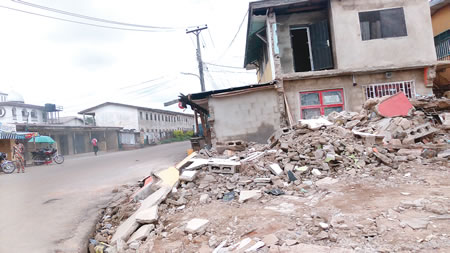 The road which is expected to boost the socio-economic development and transformation system in the state has been awarded to ENL Consortium, a private limited liability company.

The government has however stated that the project is at no cost to the government as it will be financed through a facility sourced from the Nexim Bank of China by the contractor on a “Build, Operate and Transfer” arrangement between the ENL and the state government.

Speaking on the arrangement, the governor, “This project is at no cost to Oyo state government; our partner (ENL Consortium) shall raise fund to finance it on the basis of build, operate and transfer’ as part of our public-private partnership agreement. Nexim Bank of China will provide the fund because of their belief in the expertise and international practice of our partner for whom we are guarantor.”

Ajimobi explained that the project will generate unquantifiable number of skilled and unskilled employments as well as end perennial traffic snarl within Ibadan metropolis and pledged that his administration will not leave any project uncompleted and this is why government opted for PPP arrangement to ensure speedy completion of the circular road.

“By the time we will be leaving in 2019, we would have earned the name of the builder of a modern Oyo state. If nothing else, we would also be remembered as a welfarist government,” the governor stated, asking for the support of people especially those affected by the road construction and expansion and pledging that those that have valid documents would be promptly and adequately compensated.

Senator Ajimobi had explained that his administration had at inception entrenched a peaceful atmosphere as peace, security and safety was used as the bedrock of socio-economic development which includes physical and social infrastructure.

“We are not constructing and expanding roads alone but we take road networks into cognizance. A good road network will encourage free flow of commerce, trade and movement of the people,” the governor said.

Reiterating the governor’s belief, the Commissioner for Works and Transport, Wasiu Dauda, stated that the road projects going on within the state were products of long term deliberation, careful planning, design and consultations, stressing that the projects were conceived to reduce to the barest minimum, traffic congestions and movement within the state in line with the huge industrial revolution being experienced presently.

He added that the road will not only reduce traffic congestion but will also facilitate trade, revenue generation, serve as a bye pass for inter-city traffic on routes outside Ibadan, engender effective and efficient vehicular movement as well as create an overall better standard of living.

The Commissioner for Information, Culture and Tourism, Toye Arulogun, on the heel of the skepticisms expressed in some quarters told Nigerian Tribune that the citizenry have nothing to fear as everything needed to facilitate fast and efficient execution of the project has been put in place.

He added that concrete steps had been taken to ensure that people will experience little or no difficulty while the project is ongoing, adding that nothing will be allowed to stunt the fast pace with which the project commenced.

“The firm saddled with the responsibility of the circular road is one with great repute that will not want to destroy its reputation and it has promised to deliver the project within the stipulated period without compromising standard. ENL has made it known that it has assessed $232m for the construction of the road and work has started.

“I can assure that this is a dream project that the government is determined must be completed successfully to enhance the socioeconomic development of the state and it will go according to plan without causing undue stress to the people,” Arulogun stated.