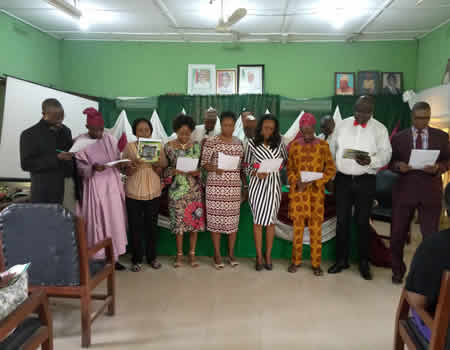 The Association of National Accountants of Nigeria (ANAN), Oyo State branch, has elected new executive to pilot the affairs of the association for the next two years.

In an election which held during the Annual General Meeting (AGM) of the association at the conference room of the Oyo state Accountant General office on Wednesday, Professor Lanre Awobode was elected as the new chairman.

In his remarks, representative of the National President ANAN, Alhaji Ibrahim Gidado urged the newly elected executive members to work together in unison, so as to achieve the projected goals and as well moving the association to enviable heights.

He advised the newly elected officers to work and collaborate with other members of the association in order to have a vibrant association that would contribute towards the development of Oyo State and Nigeria at large.

The new chairman, Awobode pledged to operate an open-door policy for outstanding contributions to the development of the association.

Awobode said ANAN, a professional body in the country is determined to work together with the government, particularly in Oyo state to achieve accountability both in the private and public sector.