Osun and the management of savagery 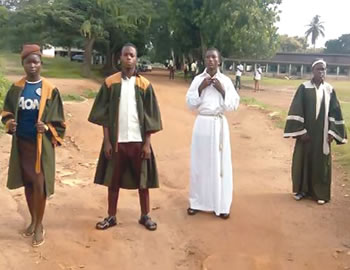 “Humanity has moved from unbelief to more intense unbelief,” writes a very controversial  Islamic strategist. Generations after generations in the Christian West, he says, “have walked down” the road of intense “unbelief and depravity.” The Muslim Umma, he adds, are “moving from error to more error through unbelief and moral corruption.” A poring over fundamentalist texts of both Christianity and Islam provides very alarming windows into the world of extremity where religious passions are inflamed, sustained and unleashed.

Fundamentalism, whether of Islamic, Christian, Jewish, Hindu, Sikh or even secular bent, has one colour: the inerrancy of its belief  system. But the world is not a huge static unchanging mountain. It is a rotating mass with its own dynamics. It does not (normally) live in the past. There was the age of Jihads and the season of Crusades. With horror, we read their histories — but today, we live with the fear of reliving them. Around us are “depravity” and “moral corruption” recommending themselves to us as divine solutions to the problems of human existence.

From my Osun State and its contrived religious controversies, to Orlando, Florida, United States, and its mass shooting, to London, United Kingdom, where a murderer shouted “Britain First” then shot and stabbed an MP mother of two, we have seen horrifying evidences of the utter  hopelessness in humanity ever being able to save itself. Across three continents, the three far-flung incidents are linked by nodes of fundamentalism. The noise from Osun State is not just finding its rhythms, it has been in the air for two years. What we are seeing now is just the denouement of an unfortunate narrative. The consequences are sure to endure beyond the present.

I am one of the one per cent who can claim to have a fair, full idea of what is playing out in that state. It is definitely not a clean-cut division along religious polarities. No. All the characters in the tragedy know. And they know that their roles in this tragic shot into the dark won’t leave history with option of kindness towards them. We have seen how dogs of war have been prowling the walkways of Osun State, seeking blood-trophies. Intensely religious WhatsApp groups have sprung up, mobilising, and, operating now at full capacity. And these are created by both Christians and Muslims. I have seen other intense social media campaigns even without any election around here. But why?

Politics is an interesting game. Some of us play a lot of it. We enjoy the intrigues. What normally scares others about politics is what some of us savour. But I do not believe anyone should play his politics in a way that seeks to make any part of this country become the African version of the Middle East, where generations after generations know only politics of guns, bombs, blood and death. And what the selfish on both sides of the divide in Osun State and their godfathers are driving at is for us to have a full state of anomie. Unfortunately, there are no elders in that state again, or, if there are, where are they?  Agba o si, ilu baje…How horrible!!!

Yes. There was a court judgement. But a judgement is the culmination of a process. What was that process like? How did that case start? Who were the initial defendants? When did the Christian Association of Nigeria (CAN) join the case? How long did the case take before this judgement we are talking about? Did the judge adjourn the case several times for the parties to resolve the volatile matter amicably out of court? Were there efforts at resolving it and what scuttled those efforts? Where were the elders in all these, if truly, the state has elders? I can ask more and more questions but I shouldn’t, by so doing, become part of the problem.

There are enough difficulties on ground there already. I do not think these deadly flares of religious fire is needed by anyone. If any fire is needed at all, it should be fire to cook good food for the hungry millions there. If fires are needed in that state today, it is fire to warm the sick and the afflicted — and they liter every backyard. I call on Muslims, Christians in that state to calm down and reassess their situation. A General told me last week that everyone loses in a war. In this particular one, everyone will come out bruised and battered. The victor won’t be either of the sides. I hope they listen.

Yorubaland does not serve fundamentalist meals. Such meals, among my people, are food for the mad. Only madmen fight religious wars, that is the Yoruba worldview. I am a Muslim. My father was a Muslim. My grandfather was one of the pioneers of Islam in my community. But all my grandfather’s siblings and their descendants were/are Christians. And, we are one very large happy family. My own story is the history of every family in Yorubaland. That is why I say politicians in all camps, who think the hijab/ sutana controversy in that state would give them unearned, undeserved political capital are wrong, very wrong, and they will soon realise their folly.

I agree with Jane Cave in her poem: “Love, the Essence of Religion.” Not everyone “who cries Lord, or hear, or pray, or preach” God’s word will be saved except their lives are ruled by God’s love:

Believe my party most divine;

Vain will my warmest notions prove,

If absent from my heart, thy love.

So, Let bigots for the shell contend,

Their precious time, whom zealous fire

And notions (not thy love) inspire.

In plain prose, the poet tells the bigots, including those of Osun State, that  “in idle controversies (they) spend their precious time” contending, not for the substance, but the shell. The substance if they must know, is the current state of their state and their people.

What they need now is love as they calm down and ask: This garment war, how is it going to lift the state from the embarrassing bottom of the ladder position it presently occupies in education and finance? A pissed-off friend reminded me that Benue State has declared every Friday as farming day; Ebonyi State has joined civil servants’ promotion with the size of their farms; and Osun State has decided to make everyday Day of religious war. Shame!

‘Indeed, you won the elections, but I won the count’