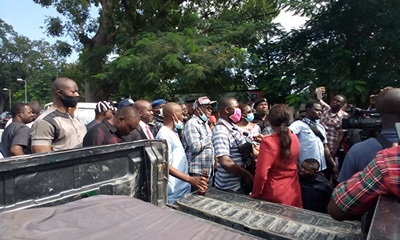 Governor Samuel Ortom on Monday afternoon charged #EndSARS protesters not to allow themselves not to be used as tools of destruction as they carry out their protest.

Ortom stated this when he addressed the protesting youths who stormed the government house, Makurdi during the  #EndSARS protest.

The governor said he had always been in support of issues that would emancipate youths.

The protesters yesterday thronged the major streets of Makurdi in their hundreds chanting solidarity songs.

It will be recalled that Benue youths on Saturday joined in the #EndSARS protest but took a break on Sunday.

The protesters resumed today with an impressive turnout turning the protest to a carnival of sorts as they used the opportunity to cry to God to save the nation from imminent disaster.

UNIBEN has not announced any date for resumption ―PRO

Peter Obi has the capacity to deliver Nigeria from its challenges, Ortom tells…