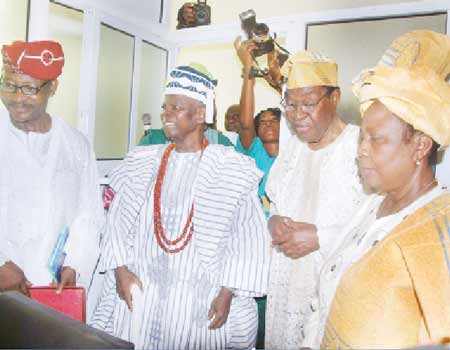 The Director-General, National Boundary Commission (NBC), Mr Mohammed Ahmad,  has said the commission is not carrying out any boundary adjustment or demarcation between Ondo and Ogun states for now.

The director-general was reacting to the allegation by Atijere community in Ondo State that the Federal Government had asked some surveyors to carry out boundary adjustment in the area.

According to him, if the boundary commission is to carry out any assignment, the communities and state governments involved will be informed.

“A member from the House of Representatives came to the commission and asked about the demarcation between the two states, it was strange to us in NBC.

“We don’t know anything and did not authorise any action that is being taken along that area,” he said.

Atijere community in Ilaje Local Government Area of Ondo State had accused its Makun-Omin neighbour in Ogun State of a fresh plot to grab a disputed piece of land from them.

In a statement, the secretary of Atijere, Mr Messiah Ayejuni, alleged that Makun-Omin was spearheading a planned boundary demarcation to achieve its aim.

A copy of the electronic statement, dated January 25, was made available to the News Agency of Nigeria (NAN) in Abuja, on Thursday, by Atijere community.

Ayejuni alleged that Makun-Omin was working in concert with surveyors from Ogun State to undertake the alleged illegal boundary demarcation on Friday (today).

“For any transparent and proper boundary demarcation to be effected, the two communities and the two states concerned must be notified and must also participate fully.

“Anything contrary is illegal and will be vehemently resisted by Atijere community,” he said.

The Atijere scribe appealed to the Federal Government and relevant security agencies to intervene by calling on Makun-Omin community leaders to order, to forestall possible breakdown of law and order.

NAN reported that Atijere and Makun-Omin, which share boundary, have had communal dispute over ownership of the piece of land.

Recently, Ondo State lawmakers condemned the encroachment of Atijere and other communities in Ilaje Local Government Area of the state by its neighbouring community in Ogun State.

This was consequent upon a matter of urgent public notice brought to the floor of the House by member representing Ilaje Constituency II in the House of Assembly, Mr Malachi Coker, concerning the recent crisis that engulfed the Ilaje communities and their Imakun, Ogun State  neighbours.

Coker said the activities of the Imakun invaders had caused untold hardship on the people of Agerige, Ajegunle, Araromi seaside, Obinehin and Atijere communities.

He explained that there were many pointers to the fact that these communities belong to Ilaje Local Government Area, adding that the communities had always been administered by the Ondo State government.