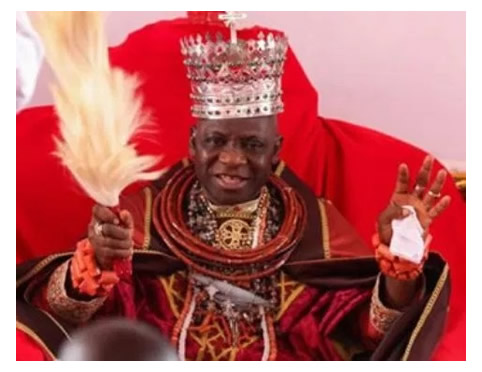 Chief Press Secretary, Charles Aniagwu, in a statement issued in Asaba on behalf of the governor, said Ogiame Ikenwoli’s reign has immensely benefited the people of Warri Kingdom, Delta State and the country at large.

Governor Okowa noted that the Itsekiri nation has remained peaceful and investor-friendly since His Majesty ascended the ancient throne of his forefathers in 2015.

“Of remarkable note is your royal carriage which is visible in the exemplary manner you have discharged your duties and has remained a source of pride and splendour to the traditional Institution.

On behalf of my family, the government and people of Delta State, I felicitate with your Royal Majesty, Ogiame Ikenwoli I, the Olu of Warri on the occasion of your 62nd birthday.

Since his ascension to the throne of his forefathers, His Royal Majesty, Ogiame Ikenwoli I, has demonstrated exemplary leadership by living above board, while remaining as the rallying point and inspiration for his subjects,” the governor enthused.

Governor Okowa stressed that as the custodian of culture and tradition the Itsekiri, the Olu has played significant roles in the promotion of harmony, socio-cultural cooperation, communal living and peaceful co-existence among the Iwere kingdom and their neighbours.

According to him, “the ideals of uncommon patriotism, unparalleled humility and sterling leadership qualities which you epitomize are worthy traits that will continue to inspire us in our S.M.A.R.T. Agenda.”

The governor prayed God to continue to grant His Majesty good health and wisdom to pilot the traditional affairs of his kingdom and offer valuable contributions to the development of the oil-rich State.