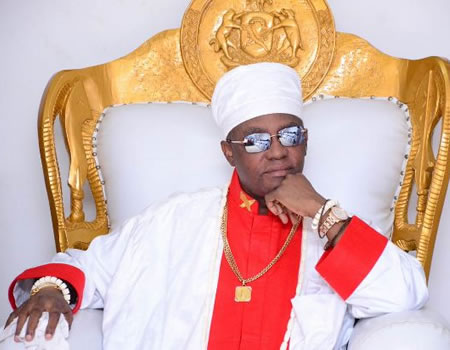 The Oba of Benin, Ewuare ll has identified cultural unity and peaceful co-existence as solutions to surmount challenges holding the nation down.

The monarch made the observation on Saturday  when he paid a visit to the Olu of Warri, Ogiame Ikenwoli at the Warri palace in the heart of Warri, Delta State.

The Oba noted nostalgically  that there was a long historical ties between the Binis and Itsekiris and, therefore, called on both kingdoms to strive for closer interactions.

He said the visit was to appreciate Ikenwoli and the entire people of Itsekiri for their support during his coronation on October 20, 2016.

“I must use this occasion to further urge that we continue to develop the ethos that reinforces our cultural unity and harmony.

“Our people share a lot of things in common, ranging from our beautiful and cherished culture to our mutual respect for hard work and human dignity.

“These are the core values which our dear nation earnestly needs to surmount the mirage of challenges we presently face today.

“As traditional rulers, we must continuously work for the peace, security and development of our people and society,” he said.

The Olu of Warri, in his remark, assured that the bond existing between the two kingdoms would continue to wax stronger.

He added that such bond was necessary for the development of the country.

“Interactions between us, especially as they affect the fortunes of our peoples, have not and cannot be impeded by these boundaries.

“We recall and appreciate what has been accomplished in this regard up till now and look forward to our continuing to do increasingly so,” he enthused.

Also in attendance were: Chiefs of Warri kingdom, including the Ologbotsere of Warri Kingdom, Chief Ayiri Emami and the  immediate past governor of Delta state, Dr. Emmanuel Uduaghan.

Others were: Provost of College of Education Warri, Professor Mary Edema and  Chairmen of Warri South Council, Dr. Michael Tidi, among others.

The Omo N’Oba was accompanied on the visit by members of the Benin royal family including the Crown Prince, Prince Ezelekhai Ewuare, Prince Igbinidu Ewuare, Prince Ehioze Erediauwa, among other princes and princesses.

Others include palace chiefs, Enigie, Ohen as well as Captain Hosa Okunbo.