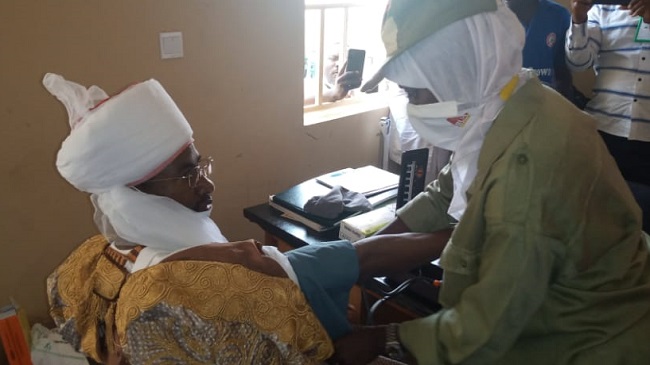 It has been observed that Youth Corps members who have served the country for the mandatory one year service to their fatherland over the years have made landmark achievements in building national unity among Nigerians.

The observation was made by the Director-General, National Youth Service Corps (NYSC), Brig-Gen Shuaibu Ibrahim, on Monday in Bauchi.

The NYSC DG was in Yelwan Duguri, a community in Alkaleri Local Government Area of Bauchi State to launch a one-week free medical outreach, organized by the Corps members to people in rural areas.

Shuaibu Ibrahim, who was represented by the Bauchi State Coordinator of the NYSC, Alhaji Hamisu Abubakar said that the Corps members have continued to make a great impact in the area of healthcare delivery, rural infrastructure and other social services.

He declared that “the National Youth Service Corps has since inception, recorded numerous landmark achievements in the area of national unity and integration. It has also made a great impact in other spheres such as healthcare delivery, rural infrastructure, mass literacy education, sports, among others.”

The DG further said that “Virtually, all our contributions in these areas are made through the activities of successive batches of youth corps members, whose patriotic zeal, dedication and selflessness have been a source of pride to Nigeria.”

He however explained that the management launched the NYSC Health Initiative for Rural Development (HIRD) in 2014 to deepen the impact of healthcare services in the country.

Shuaibu Ibrahim added that the HIRD was a platform for contributions toward promoting the wellbeing of indigent persons at the grassroots by granting them easier access to free and quality healthcare.

The NYSC boss further revealed that the programme was largely implemented through medical outreaches in communities across the country, adding that Corps Medical Volunteers carried out diagnosis treatment, including minor medical procedures and referrals of patients.

According to him, drugs, eyeglasses and other medical consumables were also given to patients free of charge saying, “I am pleased to report that so far over two million people have been attended to by the NYSC Medical Teams on the HIRD Platform. In addition to the treatment of patients, the medical outreaches also feature sensitisation of community members on disease prevention and care.”

He then disclosed that “Furthermore, the scheme has donated over 300 wheelchairs with the support of partners through this programme.”

He appealed for the support of corporate bodies and well-to-do individuals toward actualizing the Corps’ plan of setting up Mobile Clinics for wider outreach, adding that NYSC would continue to appreciate the usual donation of drugs and other consumables from partners.

Some of the beneficiaries of the outreach, Mr Yaya Ibrahim and Mrs Mariam Bako who spoke with Journalists on the sideline of the event, appreciated the NYSC for the Humanitarian gesture.

They said the drugs provided would go a long way in taking care of their ailments, adding that they could not afford to buy the drugs, eye glasses and other medical consumables as they were not financially buoyant.