Lawyer and businessman, Chief Reuben Famuyibo, is a former presidential and governorship candidate. He was a member of the Constitutional Conference organised by the late General Sani Abacha-led military junta. The chieftain of the All Progressives Congress (APC) speaks with Deputy Editor, ABIODUN AWOLAJA, on sundry issues in the polity. 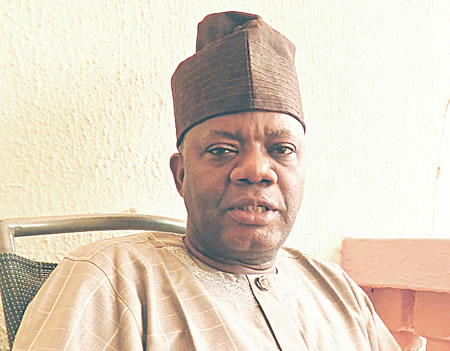 AS someone who has been on the political scene in Nigeria for a long time, what is your assessment of the state of democracy in the country in 2019?

Well, seriously, our democracy is in disarray. I don’t think we are practising democracy anymore, but autocracy. Democracy, by simple definition, is government of the people, by the people and for the people. But we are now seeing a government made by the people for a few. From the things we learnt even in elementary school, there is supposed to be separation of powers between the judiciary, the executive and the legislature. But with what is going on in the country today, everything is upside down. You see the executive giving directives to the legislature and meddling in the affairs of the judiciary, which we think is the last hope of the common man. So, I don’t believe that this is a democratic set up again. If care is not taken, this present regime will turn Nigeria into a banana republic.

When President Muhammadu Buhari ran for office, he said he wanted to fight corruption, make the country more secure, and revamp the economy. How far do you think he has been able to go in achieving these goals?

A little bit of my life was spent with the military through friendship and business. I don’t see any difference between the military regime and now. Buhari used to be somebody I so much respected, because of his antecedents. But now, the perspective of the whole world is changing about Buhari. I don’t owe anybody apology. During the little time he spent as the head of a military junta, he fought the corrupt people in this country. It was very glaring that he was fighting corruption. However, there was a lot of discriminatory prosecutions then: the way he treated the southerners was not the way he treated the northerners. I am a very good student of history, and around 1983, I was already a lawyer, so I know what I’m saying. Was it the way he treated the late Alhaji Shehu Shagari that he treated the sage, Chief Obafemi Awolowo? Was it the way he treated governors in North that the likes of Chief Adekunle Ajasin, Bisi Onabanjo and others were treated? I am very close to the people in power and I can tell you that things are now going well in the country right now. Are we fighting corruption? Look at the governors that embezzled money; the mere fact that they are members of the ruling party constitutes an excuse to get them discharged and acquitted, not through the court of law but through political association.

Orji Uzor Kalu was convicted based on what Goodluck Jonathan started, not this government. They (those in government) only tricked Kalu and because of his foolishness, he bought the carrot. He was tricked into joining the APC because of the amount of money he had made, whether legally or illegally, in order to be able to penetrate the South-East. But I know a couple of politicians that are my friends in the South-East who were also tricked to come into APC. The average Fulani person has political tricks; he knows how to bring you in, and fight you when you least expect. The government has used these politicians and dumped them. I was very active during my Constitutional Conference days when I was in the same committee with the late Abraham Okene: a lot of decisions would be taken in the morning, but by the second day when Alhaji Abraham Okene would come to the meeting, everything would have been changed. It is the same thing that is happening to our politicians today; they are being used and being dumped.I was among the people that voted for Buhari; he is somebody I so much admired. I know him personally. When he came to Ado-Ekiti, Ekiti State, to campaign in 2003, I was the All Nigeria Peoples Party (ANPP) governorship candidate. I so much admired this aura of cleanliness surrounding him then. But can we see that now? Why the double standards? The laws that are applicable to people in the South are not the same laws that are applicable to people in the North.

Why did you say that?

I can say it without any fear or favour.  The little offence that somebody would commit in the South—millions of the same offences are being committed in the North. Look at the banditry. How can you tell me that people who are killing people senselessly in the North are being negotiated with by the governors? Can that happen in the South?  People are killing day and night and a governor that is supposed to be the Chief Security Officer of the state is telling the whole world that he is holding meetings with them. Can that happen in the South? Look at what is happening in Zamfara, Katsina. The country is in disarray. The country doesn’t have a direction. I hope the day will come when the cabal that is holding the president hostage will allow him to see reason.

The perception is gaining ground that some people have hijacked the administration of President Buhari and only a few days ago, the wife of the president accused the Senior Special Assistant on Media to the President, Mr. Garba Shehu, of colluding with the president’s cousin, Mamman Daura, to give orders in the name of the president. How would you react to that?

The whole country is in disarray. A Daura can stand up and tell the whole world that he is in the Villa, our own seat that belongs to all of us, the seat of power! It is just like somebody saying that he is living with President Donald Trump in the White House, not only staying there as an illegal occupant, but now giving orders. If we copied out presidential system from America, is this development not an abnormality? Occasionally when I read some of the releases from Garba Shehu , I laugh, because a lot of power is being usurped. I read in the paper 24 hours ago, Femi Adesina, Special Adviser to the President and senior to Garba Shehu, saying something, only for our Garba  Shehu to say another thing. And when you look at the set up of a lot of the sensitive places in Abuja—EFCC, AMCON, etc—everything is now being occupied by northerners.  The claim that members of a particular group are being unduly favoured is no longer fake news; it is a reality. Look at the appointments in the last three months: you remove a Yoruba person or an Igbo person, and immediately a Hausa/Fulani is placed there. Look at the cases of Kemi Adeosun, Muiz Banire. If Banire has been removed from the Assets Management Company of Nigeria (AMCON) because he is not a banker, how many Yorubas do we have as DGs? We have said several times that this is not really a country and that is why some of us just adopt “Siddon Look” policy.

Why have these problems persisted?

It is as a result of the idea of “my daily bread first,” politics of survival. A lot of people are not ready to say the truth because of what they want to eat. I was a member of the Constitutional Conference as far back as 1995 where we made recommendations. And in 2014, a lot of these problems were addressed by the best brains in the country. But a lot of our leaders are not ready for truth because they want to satisfy their masters or are looking for positions. I didn’t want to talk about these things but when I see that you are from Tribune, which has remained very focused, I decided to talk. Why is it that it is only the Western papers, Tribune and The PUNCH that are saying the truth? A lot of papers are not even seeing things the way they we are seeing them. Look at what The PUNCH did after the country had been boxed into a corner.

You are a lawyer. Would it not be illegal to refer to the president as Major-General?

What is illegal about the title, Major-General? We call people Alhaji. What’s the meaning of Alhaji? A traveler.

The US, UK and even Amnesty International  have all  been complaining about the disobedience of court orders, but others even say that the judiciary is not sitting up, that judges ought to have boycotted cases by the Department of State Security (DSS)….

We have a lot of cowards in the judiciary. The likes of Alao Aka-Bashorun and Gani Fawehinmi are gone. Some of this mess would not have happened if Fawehinmi were around. He would have mobilized lawyers to protest. It is good that Governor Rotimi Akeredolu said something reasonable, but how many of the lawyers are saying anything? I would expect that lawyers should boycott the courts; there are one thousand and one ways of killing a fowl without using a knife. The International Court is there at the Hague. I know the government might not obey its ruling, but let the whole world see us.

In reaction to the outcry by the international community, Femi Adesina also came out to say that the government is not answerable to the UK or US…

It is unfortunate that that is coming from a well respected journalist. Yes, maybe he is just saying that because of our sovereignty, but the outside world is looking at us.  But day in, day out, our citizens go out into the world, our president goes for medical check-ups abroad; some of us have business connections. Three months ago, people asked me at a conference in the United States, during tea time: “Do you still have brains in Nigeria?” They said that the Nigeria of early 60s was better than the Nigeria of today; that there was rule of law. I was shocked. Even during the military regime, there was a lot of freedom of speech. Tribune has interviewed me before and I said this: we missed it when we started politicising the military and militarising politics. If not, how can I vote for you as a governor and you carry police and sirene, beating people up in the traffic, hitting people’s cars? That is militarisation of politics. The politiciwation of the military happened when we started putting military people in office as governors.