Newborn circumcision: Caring for your child after the procedure 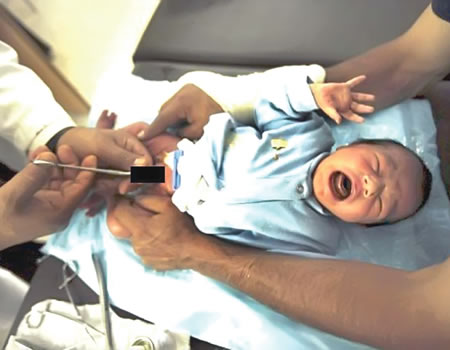 The tears of her baby filled the room and the helpless mother paced in frustration. She had no idea what to do. Her baby was circumcised 24 hours ago and had not stopped crying. What may have gone wrong with the child? Did the process develop complications? In desperation, the disheveled mother rushed her baby back to the hospital for complaints.

Nwokoro C.C. of the department of surgery, Olabisi Onabanjo University Teaching Hospital, Sagamu and his colleagues in their paper, “Post-Circumcision Complications in a Tertiary Institution in Nigeria: A Three-Year Study” published in the IOSR Journal of Dental and Medical Sciences explained that “complications of circumcision include bleeding, excessive redundant foreskin, granuloma formation, secondary chordee, dermoid cyst, partial and complete amputation of the glands penis, preputio-glandular fusion, meatal stenosis and urethro-cutaneous fistula.”

According to the experts, circumcision is an operation practiced in various parts of the world for different reasons.

In Nigeria today, circumcision is a must for males. In some parts of the country, uncircumcised children are seen as abnormal and considered to be socially inferior. Hence, children are mostly circumcised for non-medical reasons in this part of the world. In other to adequately take care of a male child after circumcision, medical experts advise the following:

What to expect as your child heals after a circumcision

After the circumcision, the groin, penis, and scrotum may appear reddish brown because of the liquid used to clean the skin before surgery. The shaft of the penis where the skin was removed will look raw and slightly swollen.

The baby may stay in the hospital or clinic for two to four hours after the procedure. His penis will be checked for bleeding and the circumcision area may be covered with petroleum jelly and gauze.

Mothers may be allowed to take their babies home the same day the baby is circumcised. Some swelling around the penis is normal in the first few days after the surgery. Some slight bleeding may occur. Paediatric surgeons advise that gentle pressure should be directly applied to the area with a clean cloth or bandage for about five to ten minutes.

According to experts, “it is normal that after the surgery, the  baby feels some pain, gets fuzzy or has trouble sleeping.”

“If gauze was used, it will probably come off when your baby urinates. Follow your doctor’s directions about whether to put clean gauze on your baby’s penis or to leave gauze off. If you need to remove gauze from the penis, use warm water to soak the gauze and gently loosen it.

It is normal to notice some bleeding within minutes, hours or an entire day but eventually, the cut edges of the glans will close up and bleeding would stop.

Immediately after the circumcision, the glans may appear red and glossy or even purple. This occurs because the skin covering the glans of an uncircumcised penis is a mucous membrane. Once the membrane is exposed, it thickens and becomes darker.

Your child’s glans may have off-white or yellowish patches in the first few days after surgery. These are a type of scab and are completely normal. Two or three days after the circumcision, the skin may look green and yellow. This is a sign of normal healing, not pus.

You may notice some swelling behind or under the head of the penis and believe it looks like a blister. The swelling is simply another sign of healing and will disappear within a week or two.

The penis may appear smaller after circumcision. This is mostly because the skin surrounding the penis is relaxed, while before circumcision it usually held the penis more erect.

How to care for your child after a circumcision

Blood staining of the diaper is common after circumcision. During the first 24 hours, check your child’s diaper at every diaper change for active bleeding. It is normal to see spots of blood no bigger than a two-dollar coin (about an inch wide), but you should see a doctor if there is more blood.

Point your infant’s penis up in his diaper to ease any swelling of the area behind the glans.

After circumcision, your infant should have a warm bath every day for one week. You can allow the lubricant gauze to come off by itself, unless you are instructed to remove it. If the gauze does not fall off on its own within 24 hours, soak it off in the bath.

When the gauze comes off, it is normal for the penis to be discoloured with drops of blood and pieces of skin at its tip.

Gently push back the edges of the penile skin from the glans after the first two weeks of healing. This will prevent the skin from sticking to the glans as healing continues.

Apply a topical barrier ointment (such as petroleum jelly) on the end of the penis after every bath and with each diaper change until the penis has healed completely. A topical barrier prevents the penis from sticking to the diaper.

Give pain relief if needed

Infants may be fussy and in pain for some hours after a circumcision, but this usually does not last more than a couple of days.

Signs of pain can include crying and problems with sleep and feeding. During the first 24 hours after circumcision, you may give acetaminophen regularly to manage your child’s pain. Be aware of how much acetaminophen your child has received in the hospital.

Here are some other things you can do to help your baby feel more comfortable:

When to see a doctor after a circumcision

Go to the nearest emergency department (ED) right away if your child has excessive bleeding (small pools of blood or spots larger than a coin on the diaper). To help slow down any bleeding before you go the ED, use your thumb and index finger to create a ring around the top of the penis and squeeze for five minutes.

Also go to the nearest emergency department if your child has:

Diarrhea: How a mother’s perception of feeding practices determines her child’s…

Caution needed in paracetamol use in pregnancy —Experts