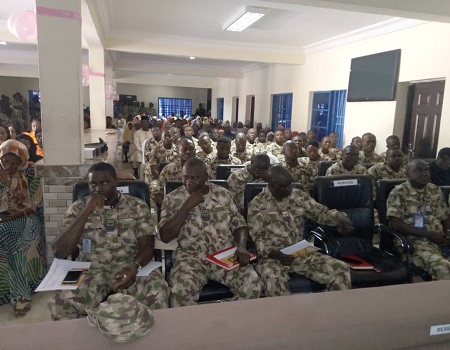 As part of its community relation in order to promote cordial relationships with its host community, Nigerian Air Force (NAF) has commenced a three days free cancer screening in Bauchi state.

While speaking at the commencement of the medical outreach, Air Officer Commanding (AOC) Special Operations Command (SOC), Bauchi, Air Vice Marshal Charles Ohwo said that the 3 days cancer awareness/screening programme was aimed at providing medical attention to its host community as a demonstration of the cordial relationship between them.

He said that the three days awareness/screening program would be on Prostate, Breast and Cervical Cancer for the general public, urging members of the community to take advantage of the facility in Bauchi to get medical attention freely.

He added, “With the burden growing in almost every Country, prevention of Cancer is one of the most significant public health challenges in the 21st century”.

According to him, “it is on this note and in the drive to live up to the dictates of its social responsibility that the Chief of the Air Staff (CAS), Air Marshal Sadiq Baba Abubakar (DFS) directed the Command to organize this 3-day awareness and Cancer screening program.”

He noted that NAF apart from the kinetic efforts to address current security challenges of Insurgency, Banditry and other emerging security threats around the country have been involved in non-kinetic actions such as Medical Outreach programs aimed at providing and bringing Medical Services closer to the Communities.

“Especially the less privileged including flood victims and vulnerable women and children who may not have the opportunity for such services,” he said.

Bala Mohammed, however, lauded the efforts of NAF leadership for the Cancer screening and awareness initiative, adding that the outreach will go along way to create awareness on cancer scourge in the communities.

He assured that his administration is committed to providing quality health care delivery services to the people of Bauchi State the more reason it has paid needed attention to the health sector by paying all outstanding counterpart funds in the health sector.

No going back on Okada, Keke ban, Sanwo-Olu insists