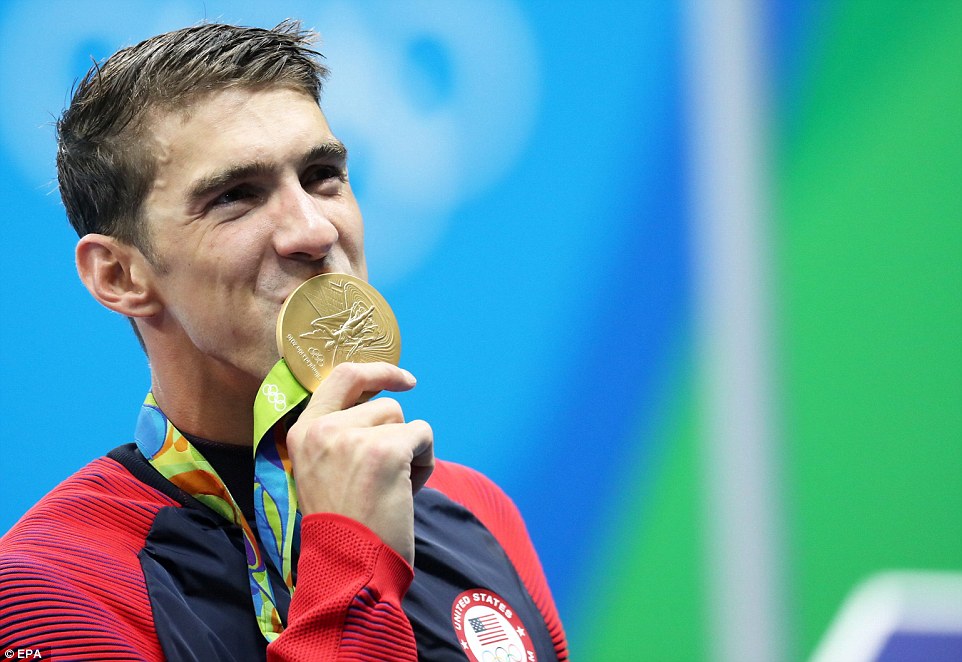 TEAM USA’s swimming team celebrated a double victory on Sunday after taking home two gold medals.
Michael Phelps won his 19th gold as part of the men’s 4x100m freestyle relay team, while Katie Ledecky broke her own world record to win gold in the Women’s 400m freestyle.
Phelps, a 22-time Olympic medalist, swam the second leg of the relay for Team USA – despite not competing in any freestyle events at the U.S. trials or in the preliminaries in Rio, Dailymail reported.
He was cheered on by his girlfriend Nicole Johnson, who was sat with their son Boomer, and Phelps’ mom Deborah.
The 31-year-old has been a part of the relay team since 2004 and was keen to get revenge after losing to France in 2012.
Instead, France came in second while Australia was third.
The team more than made up for a debacle at the 2015 World Championships in Kazan, Russia, where the US failed to even qualify for the final of the 4×100 free relay.
Phelps swam second for Team USA, taking over from Caeleb Dressel who was trailing behind France in second place. Phelps managed to overtake France with a split time of 47.12 while Ryan Held and Nathan Adrian, who has an even better split of 46.97, brought the victory home.
The gold is Phelps’s 23rd Olympic medal which includes 19 golds, 2 silvers and 2 bronzes.
The swimmer appeared at the Olympic pool with red marks all over his body – caused by ‘cupping’ therapy which has become popular among swimmers and other athletes in Rio.
‘Cupping’, is used to help blood flow in sore or problem areas for swimmers. Some techniques involve heated cups, which Phelps favours.  He even included footage of himself having the treatment in his new promotional called Rule Yourself.
USA were favorites to win the relay but it was a tight contest with Australia, France and Russia all having claims to a gold medal.
Phelps, 31, retired in 2012, but returned to work in 2014, to ready himself for Rio. He is the first male American swimmer to qualify for five Olympic Games.
He recently celebrated his nine-year anniversary with fiance Johnson who has flown out with their son to watch him compete.
Phelps had stated multiple times in interviews that while they were aware of the dangers of the Zika virus he is certain that he, Johnson and Boomer will be safe during their time in Brazil.
Meanwhile Katie Ledecky, who is being touted as the female Phelps, has broken her own world record to win gold in the Women’s 400m freestyle.
The 19-year-old raced home in 3:56.46 – almost five seconds fast than Britain’s Jazz Carlin, who came in second with 4:01.23. Leah Smith, also of the United States, was third with 4:01.92.
Ledecky, now a quadruple-world record holder, is expected to take home another two golds at Rio.