Before our IDPs starve to death 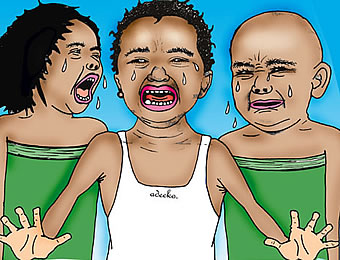 Few months ago, the news that our internally displaced brothers and sisters were returning back to their homes, after Nigerian troops had recaptured their towns and villages as part of territories formerly under the control of Boko Haram – the deadly terrorist group that has killed over 20,000 people and left close to two million persons displaced in North-Eastern Nigeria, came to many of us as a pleasant one.

More touching were pictures circulating on social media of hordes of jubilant children, surrounding some soldiers and taking selfies as IDPs cheerfully return to their homes. In the words of Gimba Kakanda in a media post, “The recent images of happy ‘returnees’ posing for selfies with their liberators, the soldiers, were the most beautiful symbols out of Nigeria since 2009, the year the terrorist cult became an uncomfortable menace from a carelessly managed face-off with the security operations in Maiduguri.”

Kakanda is spot on. That picture brought many of us relief and gave us a sense of triumph over the blood sucking terrorists group – Boko Haram. Sadly, just a few months after that wonderful event, other horrid pictures and reports coming from the Bama IDPs camp, are pointing to the fact that there are legions of demons more deadly than insurgents, lurking therein.

A report published in online newspaper on June 18 read that, “Boko Haram victims dying of starvation as Borno officials steal relief materials”, reveals that “Thousands of IDPs in over 20 camps around Maiduguri, the Borno State capital, are left hungry as officials enrich selves from the sales of diverted food meant for IDPs…” And, “The theft is not restricted to food items alone, medical drugs, toiletries, beddings and wrappers have been diverted to the market and sold by greedy officials.”

The fallout of this heinous act of some saboteurs is what Medicins Sans Frontiers (MSF), an international, independent, medical humanitarian organisation, reported thus: “…In Bama new graves are appearing on a daily basis. We were told on certain days more than 30 people were dying due to hunger and illness. Since 23 May, at least 188 people have died in the camp – almost six people per day – mainly from diarrhoea and malnutrition.”

From these reports, one would have an insight into the unending agonies and miseries of IDPs, as it seems that they have escaped death in the hands of insurgents, only to be starved to death by some group of wicked official kleptocrats, cornering their provisions. It’s so sad.

For “188” deaths – mostly children – to have been recorded within a month in the Bama IDPs camp that is not under armed siege, we should be highly alarmed that the number of children dying as a result of severe malnutrition is almost six times more than the deaths recorded in Madaya, a Syrian town under siege, where local relief workers reported 32 deaths from starvation within a month, according to Reuters.

Of course, raising an alarm now cannot bring the dead IDPs back to life. However, it can prod those responsible for their welfare to swing into action to save prospective victims. Besides, if the singular death of Alan Kurdi, the three-year-old Syrian boy who drowned in the Mediterranean Sea in September 2015, could trigger international lamentation, we ought to be more worried that an average of “six children” die daily in the Bama IDPs camp, just because some blood sucking officials are helping themselves to the food and relief materials meant for IDPs.

To be candid, saboteurs who divert food and relief materials meant for IDPs have simply continued the act of terrorism from the point where Boko Haram stopped, and they must be apprehended and duly prosecuted. In addition, those who want us to believe that deaths in Bama IDPs camp are unconnected to malnourishment and starvation but to the “torture and hunger” that some of the rescued IDPs earlier suffered in the hands of their captors, would possibly need to have their heads examined. Because, if the rescued IDPs could survive the “torture and hunger” suffered in captivity, then wouldn’t it be logical for us to conclude that the hunger and malnutrition in Bama IDPs camp has been far more severe than the hunger and torture in Boko Haram’s den?

Still, before the last IDP in Bama and other IDPs camps die of hunger, it would be apt to remind the Muhammadu Buhari-led administration that while fighting insecurity and rescuing IDPs from insurgents and raising funds for their welfare are greatly charitable acts, yet the failure to tackle the wilful acts of sabotage involved in the diversion of their food and relief materials, leading to the starvation of these IDPs to death, would amount to one of the worst forms of humanitarian betrayal, and complicity in their mortalities.

President Muhammadu Buhari should no longer hesitate in ordering a probe into the causes of the starvation and deaths in the Bama IDPs camp to apprehend those behind the criminal diversion of the provisions meant for the extremely vulnerable.

US donates 160 metric tonnes of seeds to IDPs

Over 10,000 schoolgirls participate in 2016 Mathematics Olympiad

Before Post-UTME is buried