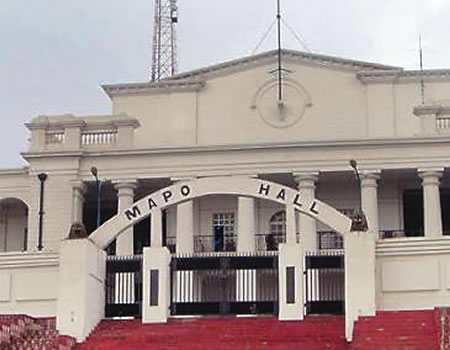 First and foremost, Ibadan is well known with the seven hills that constitute the geographical description of the city. Among these seven hills, the most influential is the Mapo Hill traditionally known as the Oke-Mapo.  Upon this hill is the easiest access to the vastness of the city  at a glance. Even with the expanding nature of Ibadan, Mapo Hill can be regarded as the centre of Ibadan.

Secondly, there exists a town hall known as Mapo Hall. Mapo derived her name from the Yoruba linguistic description about the build of the pillars (Opo) during the colonial era. Mapo Hall looks like the ancient Roman Empire’s Headquarters. Sighting this magnificent building, one is imaginatively taken back to those days when Jesus Christ was being persecuted before Pilate or the elders.

The stone of the Hall was laid in June 1925 by Capt. W. A. Ross (The Resident, Oyo Province) and it was completed and declared open by His Excellency, Sir Graeme Thomson during the traditional leadership of Oba Shiyanbola Ladugbolu, the Alaafin  of Oyo and  Oyewole, the Baale of Ibadan.

This building, is accurately an intimidation of the Yoruba people because this hall serves as the exhibition of the authoritative statue of the colonised Yoruba people. The old relics of the judicial, executive and legislative power of the white people is vividly present still date.  The Mapo Hall and its environs serve as an authentic documentation of the historical facts of colonialism as Badagry serves the purpose of slavery. Apart for the political importance of the hall presently housing local government of Oyo State, the cultural heritage is vividly seen as market women and men were holding meeting, the political office holders having their affairs within, and the court marrying and divorcing couples.  The noise of the daily affairs of the market could not be left out. Funny enough, the hall stands still, waiting for tourists to listen to the forgotten tales, that need to be told.

Why I feature tourism issues on TALOGAJU —Ajibade

Ibadan: A world of excitement