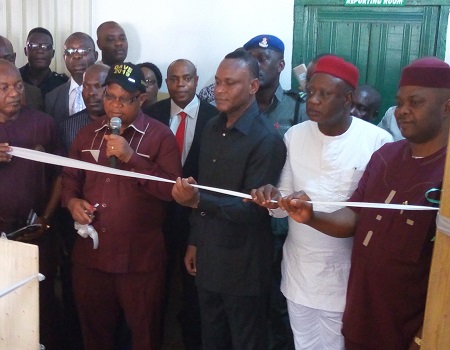 EBONYI state Governor Engr. David Nweze Umahi has procured two x-ray machines and one Coasta bus worth seventy-Eight Million Naira to the federal teaching hospital Abakaliki in complimenting their commitment to providing quality healthcare to the people of the state.

Umahi who said his administration has fulfilled 100% of its promises to FETHA made this known at the hospital during the commissioning of the two x-ray machines worth 40million, with 32 seater Coasta bus worth N38 million respectively.

The Governor represented by his deputy Eric kelechi Igwe maintained that his government can only gain votes from healthy Ebonyians come 2019 general election, lauded the relationship between the hospital and his administration in providing a suitable and enabling environment for the people.

His words: “We are here to see a promise that was made by His Excellency, a man who says what he will do, he said I should thank FETHA for the harmonious relationship.

“He asked me to commend the CMD, Dr. Onwe Oga Emeka who has been faithful in the discharge of his duty and do what should ensure quality service delivery. He has offered an unlimited partnership to Ebonyi state government, made himself available on the rehabilitation of the 13 general hospitals.

“The reason why the state government has continued to partner with him is not just to deliver health care, but that he has maintained the relationship between Ebonyi State and the federal government.

“Every promise made for FETHA by David Umahi has been completed 100%. The Governor believes the populace must be healthy for us to canvass for vote.

“It is not only the physical infrastructure that matters most, the government has visited FETHA through father Abraham to offset medical bills”, he noted.

In his remarks, the chief medical director of Federal Teaching Hospital Abakaliki Dr. Onwe ogah commended Governor Umahi for bringing the young teaching hospital to a greater height among its contemporaries.

“This is because the government of EBONYI state has done a great thing for the hospital in recognition of the fact that our clients in this hospital are 90% more Ebonyians.

“This digital x-ray machine which we have now and the one we are expecting will be put in to use properly and adequately to ensure that our patients are giving the best equipment, including a gigantic emergency complex he is building which we will soon put into use,” Ogah stated.

Meanwhile the Director Administration federal teaching hospital Abakaliki C. C OGBU commended the Governor for considering the health of Ebonyi people as a priority to restore lives back in his state.

Atiku in Benin For Consultations, says he is not desperate to be President