Good thing about morning sickness is… 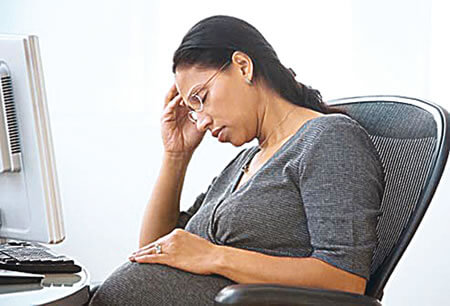 Nothing can blast the elation of discovering you’re pregnant faster than morning sickness. Around half to two-thirds of all pregnant women will experience symptoms of morning sickness such as nausea and vomiting to some degree, particularly in the first trimester.

But women who have experienced morning sickness and perhaps prayed for it to stop may be intrigued by the results of a new study that both nausea alone and nausea with vomiting means a lower chance of miscarriage in the first eight weeks of pregnancy.

Scientists have found the strongest evidence yet that vomiting and nausea during pregnancy are associated with a lower risk of miscarriage, substantiating the belief that morning sickness is a sign that the baby is developing well.

Researchers at the National Institute of Child Health and Development (NICHD) found in a study that women who had had either one or two miscarriages, those who had morning sickness in their current pregnancy had a 50 to 75 per cent lower risk of having another miscarriage.

Miscarriage is a concern for many pregnant women. It is a heartbreakingly common experience, ending 15 per cent to 20 per cent of confirmed pregnancies that many women abhor.  Although many women experience miscarriage, this loss has often been shrouded in secrecy, and couples often grieve alone.

The researchers examined data on more than 1,200 women who were enrolled in a larger study called the Effects of Aspirin in Gestation and Reproduction trial, which studied the effects of taking aspirin on pregnancy loss and live birth.

The participants, all of whom had registered a positive pregnancy test at the time of the trial, kept daily diaries of whether they experienced nausea or vomiting from the second week of their pregnancies up until the eighth week. They recorded their symptoms in a monthly questionnaire from the eighth week until the 36th week of pregnancy.

In the trial, 188 of the 797 pregnancies ultimately ended in loss. But the researchers found that women who experienced nausea by the eighth week (57.3 per cent of the group) were 50 per cent less likely to experience a pregnancy loss than those who didn’t have nausea.

And women who experienced both nausea and vomiting by the eighth week (26.6 per cent) were 75 per cent less likely to experience a miscarriage than those who didn’t have both symptoms.

The researchers in the study published in JAMA Internal Medicine had also taken into consideration various factors that could influence miscarriage rates, such as alcohol intake and chromosomal abnormalities in the foetus.

In their study, the researchers pointed out that symptoms of morning sickness may encourage pregnant women to change their eating habits, increase consumption of carbohydrate-rich foods, or avert intake of potentially teratogenic substances.

The possibility that morning sickness was associated with a lower risk of miscarriage, they also suggested, could somehow be a marker for viable placental tissue or related to the functioning of the hormone human chorionic gonadotropin (hCG)  in the mother that cause nausea and vomiting.

Nonetheless, they stated that more research is needed to figure out the possible biological causes behind this apparent link even though their findings may provide some comfort to pregnant mothers who are having a hard time – particularly in the early stages.

But Dr Akin Shodipo, a medical expert at Comfort Medical Centre, Total Garden, Ibadan, Oyo State said women who do not experience morning sickness in pregnancy need not feel that they had missed out on some kind of “protective effect”.

He declared that just as all pregnancies are not the same, so every individual is different.

Moreover, he declared that as common as nausea and vomiting are in the first trimester of pregnancy, when it is in excess, it could have adverse effect on the unborn baby.

“When morning sickness occurs outside morning, as its name suggested, they can be assumed to be excessive. Also, any nausea and vomiting more than thrice in a day can also be taken as excessive. Vomiting can lead to dehydration and weight loss so women suffering from severe sickness need to keep an eye on their symptoms,” he declared.

Dr Shodipo, however, declared that although morning sickness cannot be stopped, its effect can be minimised.

“Pregnancy is a thing of joy, not something to be endured. If you are uncomfortable with the nausea and vomiting, go ahead and reduce it.  For instance, some medications can be prescribed to help reduce vomiting.”

Previously, studies have also stated that both the baby and mom benefit from the pregnancy nausea. A study in 2009 stated that morning sickness resulted in brighter babies.

Researchers in The Hospital of Sick Children found a link between pregnancy nausea and the IQ of the offspring. On average, moms who suffered from morning sickness had children with an IQ 4-7 points higher than other moms.

Some argue that since pregnant women that experience nausea are less likely to eat and drink harmful substances, their foetus are on average more protected from food-borne illness and chemicals that potentially could impair the development of critical organs, including the brain.

So if you’re slogging through the early months of pregnancy wondering when the nausea is going to end, keep the studies in mind—maybe it’ll make the misery of morning sickness a little bit more bearable.

How to make money selling items on social media