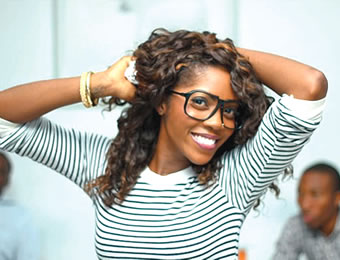 NIGERIA’S music diva and “Kele Kele Love” crooner, Tiwa Savage, is the guest on this week’s edition of Globacom-sponsored African Voices on CNN International.The half-hour magazine programme which features Africa’s most intriguing personalities who are shaping the African continent in all walks of life is shown on CNN on Friday at 10.30 a.m., with repeat broadcasts at 4.30 p.m. on Saturday, and at 12.30 a.m. and 7.30 p.m. on Sunday. There are further repeats at 11.30 a.m. on Monday and at 5.30 a.m. on Tuesday.

Globacom announced in a press statement released in Lagos on Friday that delectable Tiwa Savage will feature on the programme with South African musician, Thandiswa Mazwai.

Tiwa Savage emerged on Nigeria’s music scene in 2010 with her smash hit Kele Kele Love. Her other hit singles include Love, Love Me, Without My Heart and Ife wa gbona.

Born in Lagos, Nigeria, Tiwa graduated from the University of Kent in the United Kingdom with a degree in business administration and accounts. She however decided to forgo accounting when she got an opportunity to be a back-up singer for Mary J. Blige.  She has also performed for internationally acclaimed artistes such as Chaka Khan, George Michael, Emma Bunton (Spice Girls), Blu Cantrell and Kelly Clarkson. She has worked with renowned producers such as Black Eyed Peas drummer Keith Harris, Oak Warren Felder (Nicki Minaj, Chris Brown), Babyface and many others.

Thandiswa Mazwai, the second guest on the programme, is acclaimed as one of the most influential musicians in South Africa. She is also the lead vocalist and songwriter of Bongo Maffin.  She was raised in Soweto by parents who were both journalists and anti-apartheid political activists.

According to Thandiswa, the heavy apartheid township violence of the 1980s shaped her perspective as an artiste, adding that the writings of personalities like Steve Biko, Frantz Fanon, Chinua Achebe and Kwame Nkuruma have always inspired her writings.

AD dissociates self from proposed mega party ahead 2019 elections