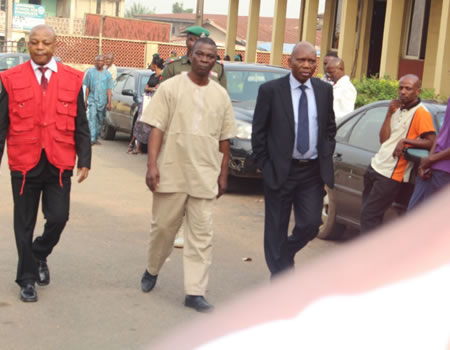 The Vice Chancellor of the Federal University of Technology, Akure (FUTA) Prof. Adebiyi Daramola and the institution Bursar, Emmanuel Oresegun, were on Tuesday dragged before an High Court sitting in Akure by the Economic and Financial Crime Commission (EFCC) over a nine count charge.

The duo were charged before the Court on a nine charge count bordering on fraud, felony, obtaining under false pretense, abuse of office, misappropriation of funds and conspiracy to steal among others. The two principal officers pleaded not guilty to all the nine charges while the counsel to the two defendants, Adebayo Olanipekun and O. Theophilus asked the court to allow them to move an oral application to grant the two defendants bail before the trail. Counsel to EFCC however, objected to the bail saying the defendant counsel must be able to show adequate facts before the court why the bail must be granted. But the presiding Judge, Justice Ademola Bola granted bail to the two defendants in N10m bond with two sureties in like sum who must be Professors in FUTA or public officers and should not be less than grade level 17. The sureties must also depose to affidavit of means, and present title documents of landed properties which must be in Akure jurisdiction and with evidence of three year tax payment while the presiding Judge adjourned to 20- 22 of March for trial.
The duo were docked following petitions from members of the institution’s community to the anti graft agency alleging the VC and the bursar of financial misappropriation.
Daramola was alleged to have been living within the institution quarters and subsequently drawing yearly allowance for his housing and furniture allowance instead of once in four years. However, there was a mild drama at the court as workers and students of the institution trooped to the court to witness the court proceeding clash. The workers who were mobilised to the court against the embattled Vice chancellor were expressed disappointment over the granting of bail to the VC, the students were in court to show support for Prof. Daramola. It took the intervention of the security operatives within the court premises to restore normalcy within the court premises, cautioning the two sides against taking laws into their hands. Meanwhile, the chairman of the Committee of Deans of the FUTA, Prof. Shedrack Akindele, described the ongoing trial of the VC of the institution as an embarrassment to the institution, saying its making issue out of no issue. Akindele, who is Dean of School of Agriculture and Agric Tech of FUTA, who spoke with newsmen shortly after the court proceeding said the entire university community was unhappy about the development. He said, “The ongoing trial of the VC to those of us in the academics is largely an embarrassment in the sense that we are fully aware of what led to the spurious allegations against the VC.”
” Everything has been discussed at the university level and we are surprised that anyone could make those things as issues to have warranted inviting the EFCC for anything of such. “If any person in the university system has any grouse, he or she would have approached the court for redress instead of the action of shutting down the whole university since October 2017.”