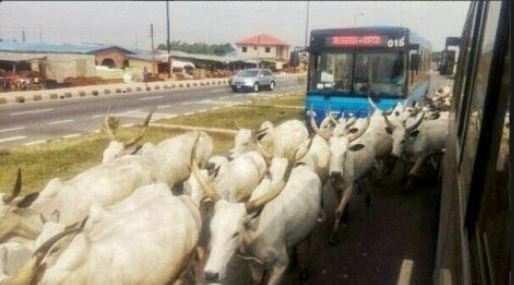 IN the year 2008 in Ondo state, en route a friend’s house, there was a herd of cattle obstructing the footpath and a thick clump of bush by the sides of the footpath in an almost silent environment. Suddenly, a Fulani herdsman stopped me, he demanded I gave him money and I told him I didn’t have money on me. Rashly, his right hand went close to his sheath as he abruptly brought out his dagger. Afterwards, I gave him all I had on me. He collected the money and said “Nagode, thank you.”.

Afterwards, he herded his cows away from the bent in the footpath I were to pass to my friend’s house. Ever since then, my feet have stayed away from that dangerous footpath. This has been my greatest nightmare in the hands of the wild nomadic herdsmen. How about our close friends  in Benue, Taraba, Nasarawa etc. whose means of livelihood in this pitiable country is farming and non-farmers alike? What about those whose villages have been ground down by incessant Fulani herdsmen and Fulani militia attacks? How about those breadwinners whose throats have been slit like animals in abattoirs? These tragic incidents call for reflection now, not until they reach our domains.

From a historical perspective, the origin of the Fulani cannot be expressly ascertained as there are different speculations as to where they first transmigrated from. But, it can be historically traced that most of the Fulani in the present West Africa are nomadic herdsmen from Senegal who went on pasture expeditions with their herds of cattle. This led to their establishment in various West African countries like: Ghana (Gold Coast), Mali, Guinea, Nigeria.

The inter-cultural relationships between the Fulani and other tribes alike have their pros and cons primarily edged on farming. Since Nigeria permits open grazing and grazing routes and provision of grazing facilities for herders, then encroachment on arable lands, farms and forest reserves is inevitable. Encroachments are always a sweet experience for herders who want their cattle fed but a bitter one for farmers who have their crops destroyed.

I think the way to change the beat and dare steps of the dear devil Fulani militias/bandits to a beat of patriotism is to provide modern ranching facilities with schools for them in the North and any other region as may be accepted by the host communities, ban open grazing, declaration of our forest as no go area for the herdsmen, restriction of herders and cattle to their ranches except on official travel permit, having a population census of herders per local government, securing our national borders against influx of herdsmen, cattle and militias from neighbouring countries except on legal permit.