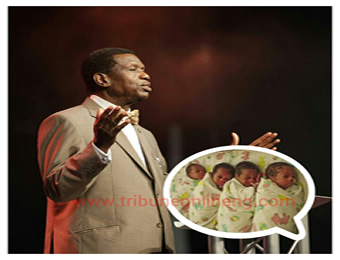 A woman has given birth to quadruplets at the ongoing 64 annual convention of the Redeemed Christian Church of God (RCCG) at the Redemption Camp kilometre 46, Lagos – Ibadan Expressway, Ogun State.

This is just as the total of 67 children have been born as of Thursday 7:00p.m.

Announcing the cheering news on the fourth day of the convention, General Overseer of RCCG, Pastor Enoch Adeboye, said the delivery of the quadruplets at the convention was unique.

“For the first time in the history of our conventions and our maternity centre, a woman gave birth to four babies,” he declared.

Of the four babies, he added, are three boys one girl.

Of the total of 67 children born on Thursday, according to the man of God,  40 are boys while 27 girls.

Meanwhile, the General Overseer said Friday Holy Ghost Service of the convention will hold at the 3×3 new auditorium at Shimawa due to congestion already experienced at the old auditorium.

He urged congregants to relocate to the new auditorium while those who wished to remain will be availed viewing screens at the old auditorium.

The cleric also urged pastors manning  viewing centres in major cities across the world to replicate exactly what is being done at the camp.

Insecurity: NSCIA faults Adeboye, CAN others over protest