FG plotting to impeach me, Fayose cries out 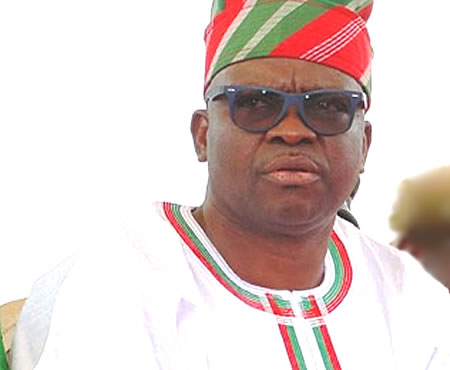 Ekiti State governor, Dr Ayodele Fayose, on Sunday, raised the alarm over an alleged plot by the President Muhammadu Buhari-led All Progressives Congress (APC) to impeach him and  as well “destabilise the Ekiti State government, using the instrumentalities of the Economic and Financial Crimes Commission (EFCC) and other agencies of government.”

Addressing newsmen in Abuja, on Sunday, Fayose declared “that no amount of intimidation, harassment, investigation and coercion will make me stop speaking on behalf of the common man, who freely gave their mandate to the APC, who are now daily failing them.”

He stated that “it is now obvious that the current government is all out to move against and silence all voices in the opposition.

“I just want to alert all Nigerians that they are at it again, but they will not succeed and I will not surrender nor lose my voice as a result of their harassment.

“A few days ago, we got it on good authority that there was a meeting with some politicians from Ekiti State, including an Ekiti-born Senior Advocate of Nigeria (SAN) and self-professed human rights activist as well as a former senator, who is also an adviser to the vice president by agents of the Federal Government, with the agenda solely on how to bring down my administration as the governor of the state.

“Certain top functionaries of the Ekiti State government and some important members of the Peoples Democratic Party (PDP) in Ekiti State and some associates of mine have now been pencilled down for arrest and indefinite detention by the EFCC under the guise of investigating the funds spent by the PDP on the June 21, 2014 governorship election and the Presidential election.

“The game plan is to make those to be arrested get detained indefinitely, forced to make statements incriminating me, while at the same time feeding the public with orchestrated fake reports, using their usual media organs.

“This is coming after their failure to use the Department of State Services (DSS) to coerce members of the state House of Assembly to buy into the impeachment plot against me with a view to silencing me being a  major voice of the opposition.

“The  plot to arrest and detain indefinitely my Chief of Staff, Chief Dipo Anisulowo and four honourable members of the state House of Assembly for treason over our protest letter on the loan from China.

“To achieve this sinister plot against the government and people of Ekiti State, we have been informed that some of their trusted allies in the EFCC have been mobilised to move to Ekiti any moment from now.

“I, however, wish to advise them to keep their gun power dry and should not be in a hurry, but rather wait till the end of my tenure in 2018.

“As a man known to keeping  to his words,  I want to assure them that I will be available to answer any of their questions, no matter how unreasonable.

“While we are not afraid of persecution from anyone or government agency, including the EFCC and DSS, I wish to state that the level at which the Buhari-led Federal Government is taking political vendetta and muzzling of opposition both in the PDP and within the APC, is dangerous to the survival of democracy in the country.

“Most importantly, Nigerians must begin to ask the EFCC what has happened to the several petitions  against APC leaders and financiers of President Buhari’s election, including former governors.

“Nigerians must, therefore, begin to ask the EFCC why it has refused to act on petitions against APC members. Why is EFCC only interested in how PDP funded its elections? Was the fund used for President Buhari’s election gotten from the spirit world? Is EFCC now for persecution of PDP members? Must everyone that is not in the APC be subject of EFCC harassment?

“It is now obvious that the current government is all out to move against and silence all voices in the opposition.”