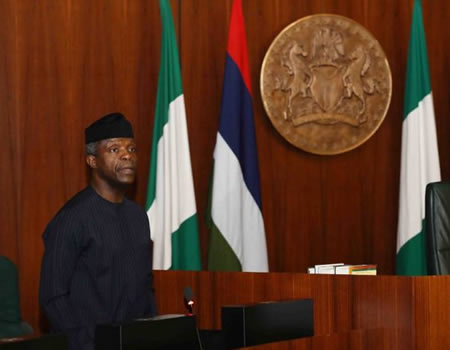 ACTING President Professor Yemi Osinbanjo, SAN, has approved the posting of the newly appointed Federal Permanent Secretaries and the redeployment of nine others.

Oyo-Ita, said that the processes for handing and taking over should be completed on or before Friday, 25th August, 2017 except for deployments with specific taking over or assumption of duty dates.

Those affected by the redeployment are: Folsade Yemi-Esan, Permanent Secretary, Career Management Office, (OHCSF), is moved to the Ministry of Petroleum Resources, while Engr Magaji A.G. has been redeployed from Ministry Interior to Ministry of Niger Delta.

The postings also indicated that Dr Shamaki, A.A.B., Permanent Secretary Special Duties Office, Office of the Secretary to Government of the Federation (OSGF), has been moved to the Ministry of Science & Technology with 1st October, 2017 as the take-over date.

While Aminu Aliyu Bisalla, Permanent Secretary, Industry, Trade & Investment, who redeployed to the General Service Office-OSGF, is expected to take-over on 1st October, 2017, Nuratu Batagarawa, from Service Policy & Strategies Office (OHCSF) is to take-over in Ministry of on 8th October, 2017.

According to the postings of some of the newly appointed Permanent Secretaries, Ehuria Georgina Ekeoma, is assume duty as the Permanent Secretary, Cabinet Affairs Office (OSGF), while Akpan Edet Sunday, is to resume duty at Industry, Trade & Investment, on 1st October, 2017.