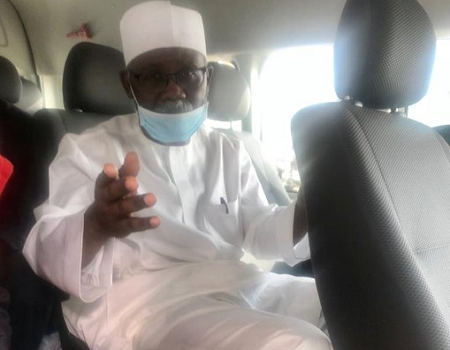 Share
The former Attorney General of the Federation (AGF) and Minister of Justice, Mohammed Adoke, has returned to Nigeria.
He arrived at the Nnamdi Azikiwe International Airport in Abuja at about 3:45 pm on Thursday.

However, upon his arrival, he was arrested at the airport by the Economic and Financial Crimes Commission (EFCC).

According to the commission, the ex-AGF left Dubai on Thursday following pressure from EFCC.

The anti-graft agency had, in 2017, filed charges against Shell Nigeria Exploration Production Company Limited and 10 others, including Adoke and Nigeria Agip Exploration Limited.

They were also accused of other forms of offences involving the sum of about $1.2 billion, forgery of bank documents, bribery and corruption.

According to the commission, “the EFCC boss, Ibrahim Magu, and Dubai authorities have held series of meeting in respect of the former Attorney General.

“He was accompanied by INTERPOL officers on Emirates Airlines Flight 785.

“The aircraft departed the Emirati commercial capital at about 11 am Dubai time (8 am Nigerian time) and touched down at the Nnamdi Azikwe International Airport, Abuja at 3:45 pm.

“Officers of the EFCC were on ground at the airport when he arrived.