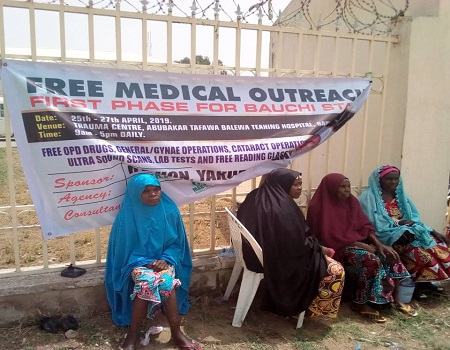 In continuation of his humanitarian service to his constituents as well as others particularly the less privileged, Speaker of the House of Representatives, Yakubu Dogara is sponsoring a free medical treatment of 10, 000 people in Bauchi local government area of Bauchi State who have been diagnosed with various ailments.

The medical outreach which commenced on Thursday at the  Abubakar Tafawa Balewa University Teaching Hospital (ATBUTH) Bauchi would be carried out by a team of specialists under the aegis of ‘Doctors on the Move Africa’.

While speaking with Journalists shortly after the flagging off of the exercise, Team Leader of Doctors on the Move Africa, Dr. Haruna Joseph Kigbu explained that the exercise is the first phase of the annual free medical outreach being sponsored by the Speaker adding that the second phase would hold in Azare, Katagum local government area of the state.

”We are here today, to implement a free medical outreach program that is being sponsored by the Speaker of the Nigerian Parliament Yakubu Dogara. Our projection for the next six days is treating about 10, 000 patients. Last term we were able to treat 18, 000 patients in this hospital”. He said

According to him, the services to be provided to the patients include general consultation, administration of free drugs, laboratory service, Ultrasound scanning, test and treatment of diabetes, hypertension and surgery on people with cataracts, fibroids, Hernia etc.

He also called on the incoming Governor of Bauchi State, Senator Bala Muhammad Abdulkadir to ensure that he committed funds into such project opening that many people die of ailments because they cannot afford health services.

While answering questions from Journalists in an interview, one of the beneficiaries, Laraba Shehu who said she was there to receive treatment on her hypertension commended Yakubu Dogara for the gesture confessing that he has brought succour to patients that are poor.

Another beneficiary, Adams Danjuma who said that he was diagnosed of hernia for a year now but could not afford the cost of surgery commended the kind gesture of the Speaker opining that if other elected leaders will emulate him then the essence of democracy would have been achieved.