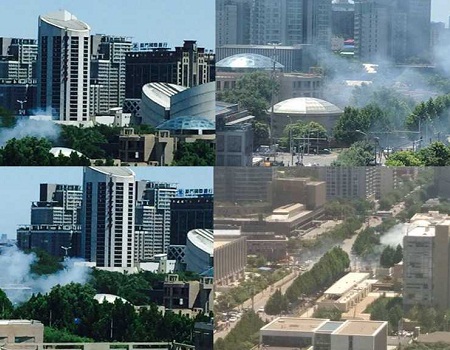 A man has detonated a small, low-grade bomb outside the United States embassy in Beijing, according to US and Chinese authorities, injuring himself but no one else.

The explosion occurred at the south-east corner of the embassy compound, a heavily fortified structure in the north-east of the Chinese capital, at about 1 pm local time (6 am BST), The Guardian said.

Chinese police said in a statement that the suspect was a 26-year-old man who hurt his hand while setting off a “firecracker-like explosive”.

A US embassy spokesperson said: “According to the embassy’s regional security officer, there was one individual who detonated a bomb. Other than the bomber, no other people were injured, and there was no damage to embassy property.”

Chinese police identified the suspect only by his surname, Jiang, and said he was from Tongliao, a city in China’s Inner Mongolia region. Police said he had been detained and taken to the hospital. They did not identify a motive.

Videos and photos posted on social media earlier on Thursday showed smoke at a crossroads as groups of pedestrians gathered and police surrounded the area, which is home to several embassies. A Chinese police car near the embassy appeared to have been damaged. Witnesses reported hearing the blast.

A witness who only gave his surname, Li, said he was cleaning the road outside the nearby Japanese embassy at the time of the incident. “I heard the sound of a big explosion and then women screaming,” he said.

News of the blast spread quickly on Chinese social media, attracting nearly 1m views before search terms related to the incident were blocked.

The bombing comes as China and the US are locked in a trade dispute. While Chinese officials and state media have been critical of the White House, there has been no groundswell of public anger towards the US.

Within a few hours of the blast, police were ushering journalists away from the scene. Traffic was allowed to flow again and visa applicants were lining up outside the embassy.

The state-run Global Times earlier reported that a woman spraying petrol on herself had been taken away from outside the US embassy on Thursday morning in what appeared to be a separate incident.

Turkey: Shots fired at US embassy

US uses ‘mother of all bombs’ for first time in Afghanistan

Fake US embassy in Ghana shut down after decade issuing visas