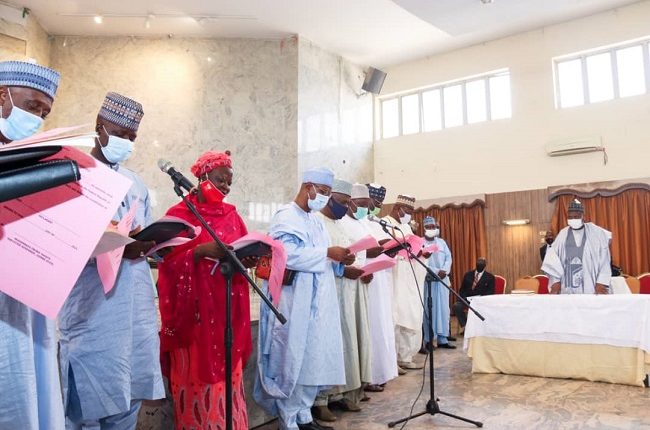 Few months after the violent protest that claimed several lives and properties in Billiri aftermath of the selection of new Mai Tangale, Gombe State Government has constituted and inaugurated a commission of inquiry to investigate the root cause of the violence which erupted between February 17 and 20 2021.

State Governor, Muhammadu Inuwa Yahaya, on Monday, inaugurated the Commission of Inquiry charging it to dig out the remote and immediate causes of the violence.

The commission of inquiry was constituted following the violent protests that resulted in deaths of innocent persons, damage and destruction of valuable property including residential houses, business premises and Mosques thereby causing the displacement of families and commercial activities.

Inuwa Yahaya while addressing the Commission members explained that, “You may recall that following the death of his Royal Highness the Mai Tangle,  Abdu Buba Maisheru, the state government directed the Kingmakers of the Tangale Traditional Council to commence the selection process of the successor, however before the government could finalise and make a pronouncement on the new Mai Tangle, some unpatriotic elements began an Endsars-type protest (codenamed #LockdownBilliri) by blocking the Gombe-Yola federal highway and other entry points into Billiri local government and thereafter some unscrupulous elements hijacked the protest and turned it to a violent one with the support of unpatriotic purveyors of fake news via social media.”

The Governor further said that the protests erupted even before the government took the decision on who to appoint but stressed that one undeniable fact is that spread of fake news contributed immensely to the escalation of the violence.

According to him, “Some people may be tempted to conclude that the crisis emanated from the choice of a new Mai Tangle even though the protests erupted even before the government took a decision on who to appoint. Some may be tempted to give the crisis a religious or political colouration or both.”

He further said that it is in light of this that the Gombe State government strongly believes that determining the causes of the crisis is needed in order to sanction those involved and take necessary measures to prevent future occurrence.

Also, “Make appropriate recommendations to government on measures and means of preventing the future occurrence of violent protests and how to make perpetrators account for their acts,” among others.

Inuwa Yahaya urged members of the commission to be thorough and fair in discharging their assigned responsibilities while calling on the people to assist the commission with honest, useful and genuine information.

He noted that in order to cushion the effects of the violent protests, the state government recently distributed a “considerable quantity of palliatives to the people directly and indirectly affected by the crisis.”

He added that the Commission of inquiry is comprised of people of impeccable character drawn from diverse professional backgrounds with Retired Justice Mahmud Gurama as Chairman.

Earlier in his welcome address, Secretary to the state government,  Professor Ibrahim Abubakar Njodi, reminisced over some of the measures earlier taken by the state government, including the imposition of curfew, stakeholders’ engagements and other steps in stabilising the situation in Billiri.

While congratulating the members, the SSG called on them to justify the confidence reposed in them by the Governor.

The commission has sixty days to submit its report as contained in a statement by Ismaila Uba Misilli, Director-General, Press Affairs, Government House, Gombe.