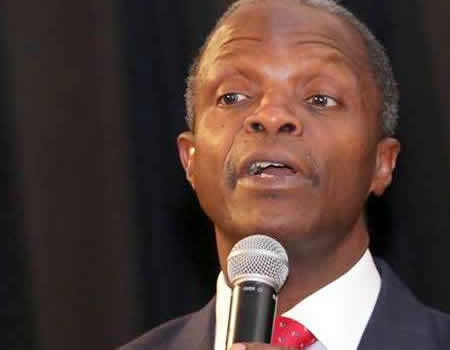 The Acting President, Prof. Yemi Osinbajo, has called for robust international collaboration to facilitate the repatriation of the country’s stolen assets.

Osinbajo made the plea in Abuja on Thursday at the opening of a two-day National Dialogue on Corruption organised by the Office of the Vice President and the Presidential Advisory Committee Against Corruption (PACAC).

According to him, the effort at fighting corruption in the country is being delayed by long and complicated response by the international community.

“The last point I want to make is with respect to international cooperation.

“I think that one of the critical issues that we have discovered in our fight against corruption is that we need much more robust international cooperation especially with respect to return of assets.

“And I think that it is important for countries of the world where stolen assets are located to really work with us in ensuring that these assets are returned speedily.

“I know that the United Kingdom is working with us in particular on this issue of beneficiary register.

“That will be extremely useful for us because we will now be able to discover who is behind some of the names of companies and other shelves that are used to hide stolen assets.’’

Osinbajo observed that the International Criminal Court was one of the great deterrents for countries where leaderships could be tyrannical or violating the rule of law as the court was ready to hold people to account.

He said the international community should work with the country in such way against corruption.

were found but that stolen property and assets should be returned speedily.

The acting President noted that corruption in the country was a systemic problem with every tier and arm of government propagating the life-threatening social anomaly.

According to him corruption thrives where it is allowed to thrive but affects the social, religious and economic lives of the people.

Osinbajo said the fight against corruption was also made difficult when the people saw that there were no consequences and hence joined in the bad behavior.

He suggested that the agencies of government should identify models of fighting corruption that had worked in the past and apply them in other anti-corruption programmes or endeavours.

He urged the partnership of the executive, legislature, judiciary, civil society organisations to bring the vice to an end noting that “our nation cannot survive the level of corruption in the society’’.

He advised that the citizens should avoid “finger-pointing’’ which he identified as unnecessary but added that it was important to acknowledge that there were problems.

The Acting President hailed PACAC for the initiative as well as the stakeholders in attendance and expressed the hope that the event would identify some practical ways to solve the problems of corruption in the country.

Participants differ on role of social media in journalism